The race to bury a jet underground

You wait decades for a buried jet liner to turn up then three appear all at once. The big news out of Frieze New York yesterday was Swiss artist Christoph Büchel’s attempts to find sponsors for his site specific project, Terminal, which involves burying a decommissioned Boeing 727 under the ground. Buchel is reportedly looking for $1.5 million for the project, which has been ongoing for over a decade in partnership with a number of art institutions.

Phaidon readers may remember a year ago we brought you news of Turner Prize nominee Roger Hiorns’s plans for a similar project in the UK and US. In the wake of that story we were contacted by a collective called Bury The Jumbo who also plan to bury an aeroplane underground in collaboration with airline Swiss.

In reaction to the news, Hiorns told Phaidon this morning. "It's going well. I'm in a land discussion, and have identified the 737 plane in Gloucestershire and the method with my engineer's team. We've started, we're really quite advanced."

"I think we have three different intentions on the table. Primarily I'm keen not to entertain. like my recent donations of large scale works to the state, I want to continue this attitude to the jet work, perhaps to establish a set of scattered geographic psychological faults around the UK.  It's important to deny spectacle in this work.  In turn, the anarchists (Bury The Jumbo) are looking to make an environmental and social impact. Within their non-hierarchical decisions, to do away with the jet makes complete sense. I hope they do well. Their non hierarchical attitudes disregard the old fashioned notion of originality, perhaps we all have identified together a social/political sticking point.

"In order to display the mind, I think the work's key is psychological, and through discusssion the work's image exists in many minds already. To make this work real is an amplification of contemporary anxiety, burying a dominant object like a plane. Is it almost unnecessary to make the work in reality? Perhaps the idea is enough. Can I resist production? I always ask myself this question. It seems at this stage I cannot, and I hope the others cannot too."

Christoph Büchel plans to bury his plane in Kern Country in the Mojave desert. Its realisation has presented serious geographical environmental and technical challenges that were finally overcome after six years of negotiations with the planning and building department and planning commission of Kern County, CA. Many institutions have been involved in the project including the city of Munich 2005, and Los Angeles County Museum of Art since 2008. The artist currently has 1% in the Frieze outdoor sculpture park which consists of six trolleys bought from homeless people for up to 500 dollars. Among the issues the piece addresses are ones around the distribution of wealth. Büchel’s spokesman says the idea is to sell the trolleys for a hundred times what was paid for them. 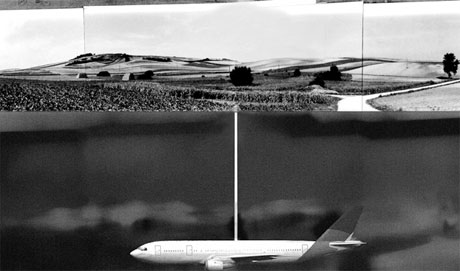