Valentina D'Amaro - Why I Paint

In Valentina D’Amaro’s work, landscapes represent a canon rather than a specific place, writes Michele Robecchi so eloquently in our new book Vitamin P3 New Perspectives In Painting. The flat green fields, leafy trees, aligned bushes and white skies that characterize the vast majority of her production, whilst loosely based on photographs taken by the artist during research trips, do not reflect existing locations. They are, instead, fictional versions of how a landscape is commonly perceived – archetypical propositions designed to play around with the notion of what could plausibly and effectively exist, by giving the minimum amount of information.

The ambiguity resulting from the combination of the stylized smoothness of the execution versus the sheer naturalism of the suggested scenario generates a picture with no narrative or apparent hierarchy between the elements involved, Robecchi writes. The horizon line is invariably positioned in the middle; the vegetation is sparse but rigorously balanced; the complex variations of tone typical of nature are reduced; and the predominance of green further implements the desire to propose an idealized dimension, conducive to meditation and relaxation. Here, the Vitamin P3-featured painter tells us what interests, inspires and spurs her on. 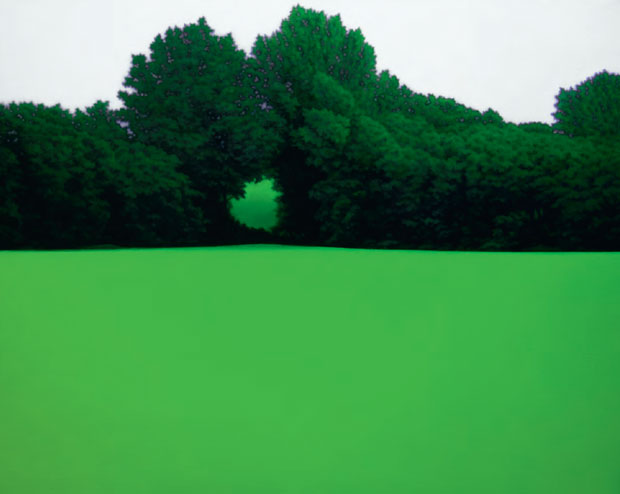 Who are you? Valentina D’Amaro, an Italian painter, living and working in Milan. Ever since I was a little girl painting has dominated my life. I used to spend a lot of time looking at the pictures in art books, drawing all day long and going to see as many paintings as I could. At a young age I started messing around with oil painting and in the process learning which techniques were important to me in order to make the paintings I wanted. Then followed a lot of years of practice and making copies of ancient and modern artists, in an attempt to understand the secrets of oil painting. And I haven't finished yet!

What’s on your mind right now?  New works I’m doing for my next solo show in Varese, at Yellow artists run-space. The whole project will be a celebration of the colour green. 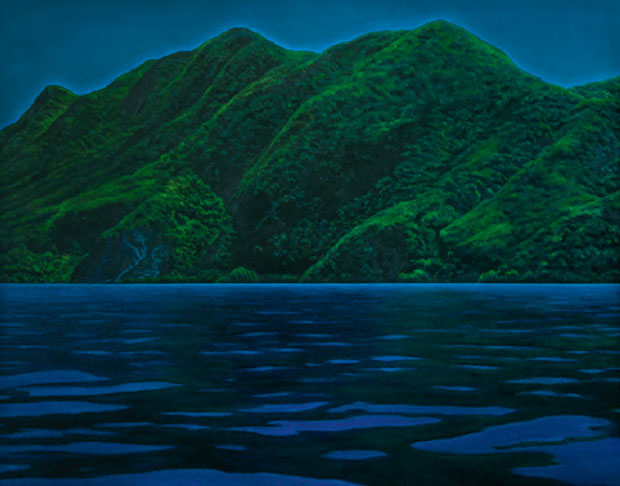 How do you get this stuff out? Well, it starts with travelling - looking and taking pictures of views and landscapes. There is something really strong and irresistible that calls me. Even if there are no humans or animals - or any other kinds of subjects - it’s the scene in itself, through its composition, light and dark contrasts, colours, that induces in me particular states of mind.

How does it fit together?  After selecting the picture that inspires me most, a very long process begins. First of all, I take my time to really observe the picture, until an 'ideal version' takes shape in my mind - something more characterized and meaningful. Then, starting from the drawing to the layering of oil paint, it’s this new mental image that guides me. At the beginning it’s more detailed, but the more paint I put on, the more I erase, looking for the essence. Thanks also to this process the green surfaces (or the blue ones in the 'Vespro' series) keep on reflecting a special vibration, kind of hypnotic, that adds to an apparent visualization of nature's hidden energies. 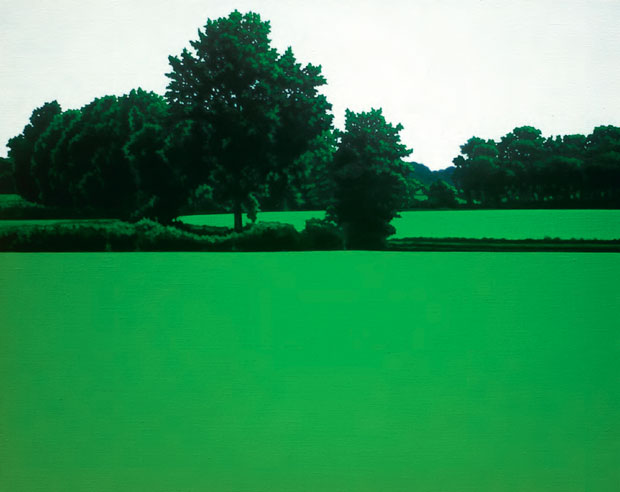 What brought you to this point?  I could say observation, meditation and connection with intimate deep dimensions where you can 'hear' only if there is silence. It’s a mix of thought and technique, exactly in this order. When a long time ago I experimented with painting, studying old masters' techniques and trying to reproduce them, I learnt there were some things that gave images and colours more intensity and appeal, and that it was also important to ration them in order to give the whole image the right equilibrium - an 'Altogether' sense.

Can you control it?  Well, actually, it’s not easy at all. Even if most of my paintings are landscapes, every work is intimately different, every one has its own special character. And I have to take care of it during the whole process. Every painting must achieve a particular balance in itself. It’s always a challenge and a struggle, too. It takes patience, perseverance and time - months and months.

Have you ever destroyed one of your paintings?  Yes, sometimes works don’t go as I hope. Maybe I lose the thread. When I work it is important for me to be in a state of total concentration and listening, just to anticipate how to work on the painting. Even if I always try to protect this bubble phase, sometimes external events break it. I might get nervous and the work will pay for that. Then there are also some days in which I feel I’m not connected, and the best thing to do is to get away from the work.

What’s next for you, and what’s next for painting?  All my art achievements are the result of a lifelong research into something that can’t be said in human words, but that passes through senses. I could call it a non-conceptual way, assuming that what we call conceptual arises in our mind responding to logic  and experience. What is interesting to me is looking beyond, to be open to intuition, to have a sense of the unexpected, of a wonderful consciousness. As Shakespeare said: "There are more things in heaven and earth, Horatio, than are dreamt of in your philosophy." As for me, I’m going on in this way penetrating more deeply these regions of intuition. And painting, I think, will evolve with it in a never ending attempt to return to visibility what the mind sees.

Find out more about Vitamin P3 New Perspectives In Painting here. Check back for another Why I Paint interview with a Vitamin P3-featured artist soon. Finally, be sure to check out more of Valentina's work at Valentina D'Amaro.com