Aliza Nisenbaum - Why I Paint

For a number of years, Aliza Nisenbaum mainly painted small, intense pictures of flowers, as well as larger, diaphanous abstractions that depicted tangled, ghostly limbs alongside other ambiguous apparitions. These distinct bodies of work seemed to be motivated by a shared set of questions regarding figuration in painting: what constitutes human presence in an image? Where is the line between figuration and abstraction? When does a human subject become an object, or vice versa?

In 2012 she began working with ‘Immigrant Movement International’ (IMI), a project initiated by the artist Tania Bruguera in Queens, New York. The organization, which is part thinktank, part community space, part resource centre and part creative art workshop, is designed to help immigrants to the United States ‘imagine a better future’. Nisenbaum’s contribution, at first, was to teach an English language class using art. As she became increasingly involved in the lives of her students, she began to ask them to sit for portraits.

The slow process of painting the portraits allowed Nisenbaum to listen to their stories, to become intimate with them and their families. Many became her friends. As Nisenbaum got to know her subjects, she learnt more about the homes that they had left behind, and came to realize that people are made up as much of absences - the negative spaces of memory, of distant friends, family and places - as the visible presence of their physical being. Here, the Vitamin P3-featured painter tells us what interests, inspires and spurs her on. 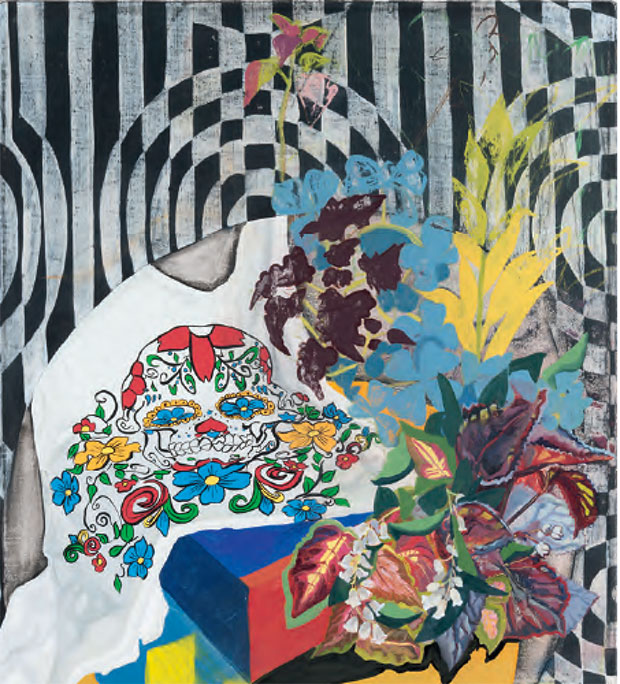 Who are you? I’m a painter living in New York City. My life and work have been deeply influenced by my trans-border upbringing. I was born and raised in Mexico City to a Russian-Mexican father and Norwegian-American mother. My family immigrated to Mexico from Russia when my grandfather was a young boy with his family fleeing the pogroms.

What’s on your mind right now? At the moment, especially after this summer in the U.S. with seemingly constant reports of racially motivated police violence, not to mention the rise of Trump, I’m thinking about the stakes surrounding the body and identity. I’m interested in the many ways this is being addressed in academia and on the streets - from students thinking through the nuances of racism through intersectionality theory to the activism of the Black Lives Matter movement. I’m also glad to see the way debates around immigration are being stirred worldwide. 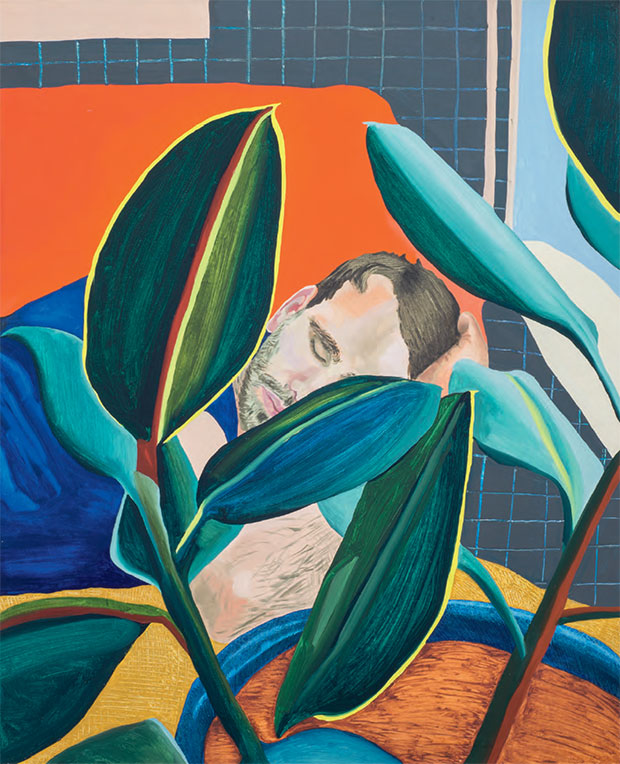 Two of the painters I’ve been thinking about recently are Maria Izquierdo, a Mexican artist working at the same time as the Muralists, yet aiming for a more nuanced view of the individual (I love her paintings that recall her memories of circus performers) and Sylvia Sleigh, for her portraits of 70’s feminist groups in the US. I’ve also been inspired by craftworks found in textiles from markets in Oaxaca and Chiapas, Mexico. Another artist I have been looking at recently is Hannah Ryggen, the Norwegian weaver who made large tapestries in the 1940’s full of allegorical and utopian images confronting the landscape of Europe during the Second World War.

How do you get this stuff out? For about 4 years now I’ve been painting portraits of Mexican and South American undocumented immigrants to the United States. The slow process of observational painting generates the conditions for a very specific encounter and conversational exchange between myself and my sitters - sometimes individuals, though often groups that span generations. I started by volunteer teaching at Immigrant Movement International, a community center/art project started by Tania Bruguera in Queens, NY. Through teaching I got to know the families I now paint - in some cases we’ve developed relationships over several years. I’ve painted the same children, parents and siblings, seeing them grow, and we have come to share many experiences together. I get involved in their lives, learning about them over dinners shared together and through research. With their input I decide how the paintings will take shape. 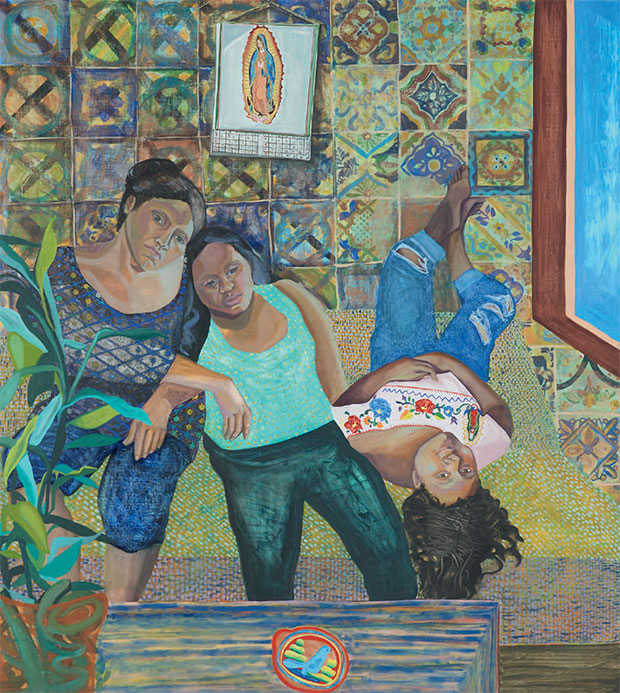 How does it fit together? I use a structure of montage in my work paring the live models I work with along with historical imagery, or imagery of the textiles, and crafts I find in their homes or that they recall from the places in Mexico were they were born. I’ve also made still-life paintings that juxtapose objects I collect on my travels back home to Mexico alongside objects that I find in the US and that attest to a displacement of Mexican tradition here, where I’m living now - like plasticised skulls, or Day Of The Dead motifs that have been converted into T-shirt prints.

What brought you to this point? I’ve been thinking a lot about attention as a form or ethics - painting is not just about looking. I wanted to depict specific subjects yet continue this line of thinking regarding reciprocal modes of attention between sitter, artist and ultimately viewer. How we come to understand ourselves is tied to others’ perceptions of us and so the visibility of particular bodies is crucial to understanding formations of subjectivity. I’m interested in the politics of visibility who and why someone is depicted. 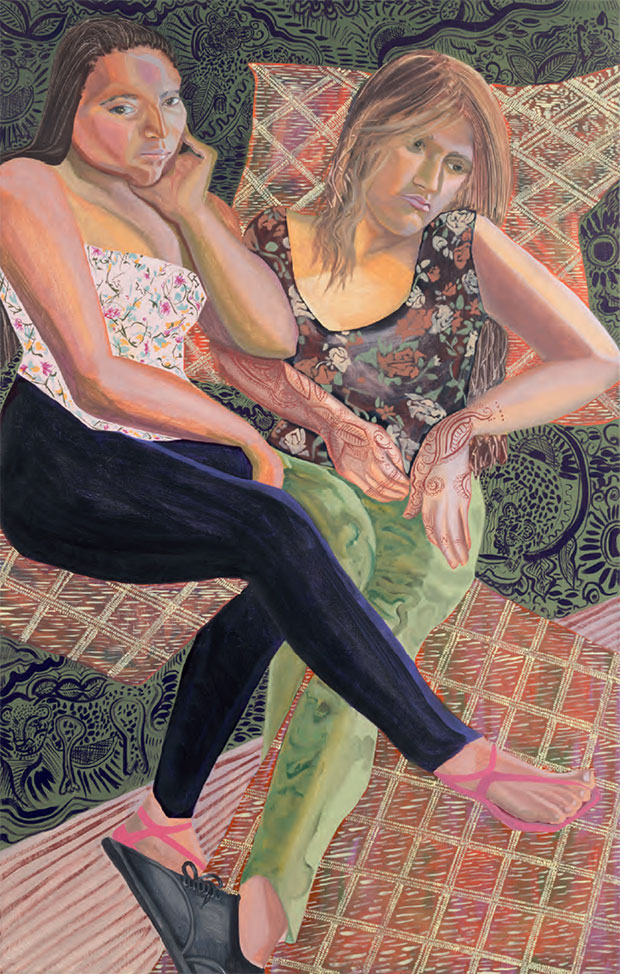 Can you control it? The part of my work I most enjoy is that it extends out into the world and into situations that I have no control over. Some of the planning happens on site in the homes or public places where my subjects live and go out to. The models then come to my studio where I have a bit more control. Often times even though I may be painting one person the extended family joins us in our painting session, these then become a mix of art classes for kids while they watch me paint, and a conversation space for all of us.

Have you ever destroyed one of your paintings? Yes. If I feel that the work is not surprising me, or I’ve lost the connection with my subject, then I have to start the painting again. 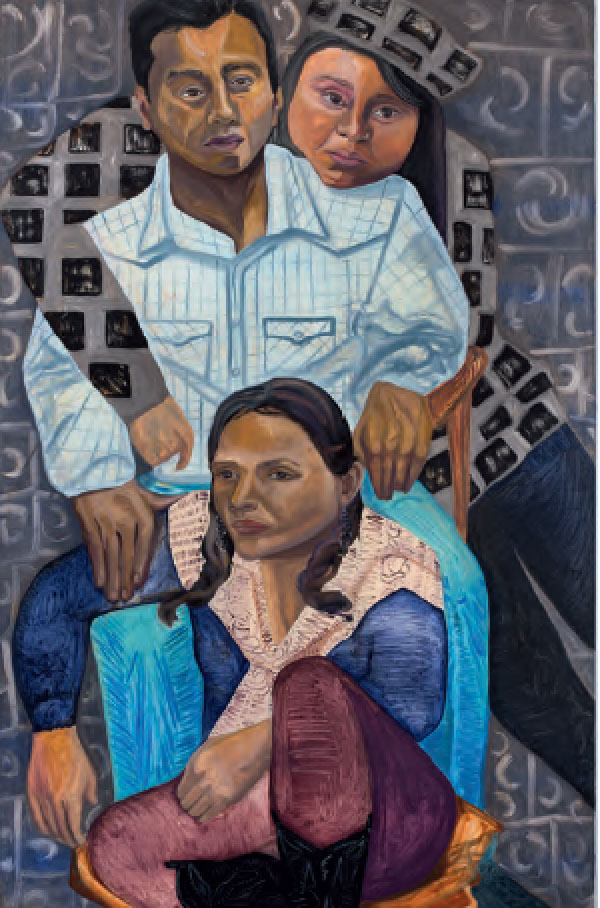 What’s next for you, and what’s next for painting? My latest paintings are group portraits of people who work in public office, such as the recent portrait I made of 15 women who work at the Mayor's Office of Immigrant Affairs in New York City. I’m interested in showing these women in group-formation and on their own in their private homes as well in a separate set of works. I’ve been thinking about Hannah Arendt and her writing about the private realm as intrinsically connected to the public one. In the Human Condition she states: ‘A life lived exclusively in the bright glare of the public realm will fade. It will lose depth, that is, its ability to appear into the world. It needs the private realm to recover, to reform, in order to reappear and once again participate in public.’

I cannot speak for painting in general, but I think the pressing questions are bound up with who is seen and acknowledged in the public sphere, and how their body is depicted; do we reinforce stereotypes and comodify their subjectivity? Or are we questioning identity as much as we attempt to depict it. These are the problems I am painting through at the moment.

Find out more about Vitamin P3 New Perspectives In Painting here. Check back for another Why I Paint interview with a Vitamin P3-featured artist tomorrow. Finally, be sure to check out more of Aliza's work at Mary Mary.