Meleko Mokgosi - Why I Paint

Meleko Mokgosi has stated that, ‘You have to know the history to painting, but you also have to know how to negate that history.’ For the Botswana-born artist, locating the limits of the medium is a generative process. Mokgosi’s paintings are large, and when hung side by side (as they often are) they become, as some critics have noted, cinematic. Indeed his subjects appear like film extras waiting for instruction, adrift in negative space, seemingly without context. By using the language of cinema (such as storyboarding and framing) together with his unusual form of social realism, Mokgosi’s depictions of figures from African society and politics – usually floating within passages of raw empty canvas – are open to the possibility of a story, albeit an alternative and incomplete one.

In dialogue with post-colonial discourse, Mokgosi’s work is primarily concerned with renegotiating issues of identity, nationhood, history, memory and perception. Importantly, Mokgosi’s documentary-like assemblages are often decontextualized images that have been sourced from photographs and news clippings from his homeland. The paintings emphasize a diversity of approaches to the notion of democracy, highlighting the dissonance between individual and collective thought, and showing those who are otherwise denied representation. Painting is here put in the service of those who are not usually seen or heard. Here, the Vitamin P3-featured painter tells us what interests, inspires and spurs him on. 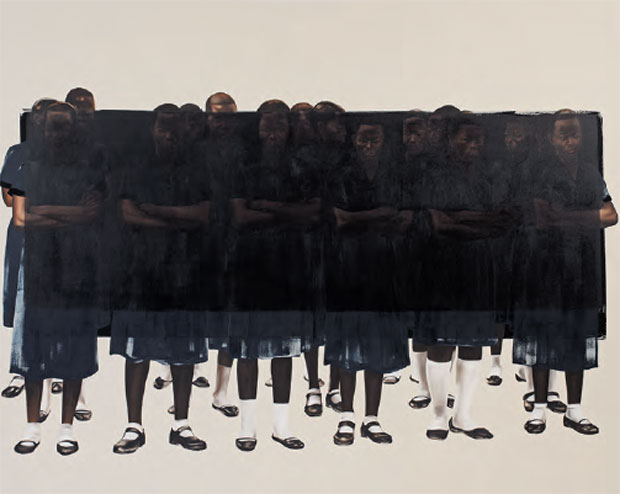 Who are you? Meleko Mokgosi, artist and assistant professor of practice at Gallatin, New York University.

W hat’s on your mind right now? Trying not to get anxious about my first New York solo exhibition, and getting ready for the new academic year. The exhibition, at Jack Shainman Gallery, is broken up into two chapters, namely Lerato (Setswana for “love”) and Comrades. The chapters are two out of eight in my current project, Democratic Intuition (2014-present). I have been thinking a lot about democracy and trying to wrap my head around how this thing functions, and most importantly, how ordinary people understand and reciprocate it at the level of the daily-lived experience.

How do you get this stuff out? Out? It always stays in. My way of working is rather slow and boring, especially for a painter - so no late night epiphanies and musings with a whisky and cigarette. All my projects begin with the title and chapter titles; so no titles and research, no painting. The titles are strategic in their role as conceptual frameworks for the project. Following the conception of the titles, I conduct in-depth research involving the collection and analysis of data, which might include anything from reading to gathering media images, sand samples and music, as well as extensive travel to take photographs. After a period of research, I use line drawings to storyboard all the paintings that will be produced. During this phase, I make one “master” drawing or diagram for each painting, and in these drawings I map out the composition, line work, colour schemes, brushstrokes, and general layout of every panel, as well as how each panel relates to the one next to it and the installation as a whole. So it usually takes eight to twelve months before I get to make paintings. I find this method rather helpful because it allows me to follow the rules that guide my practice, as well as slow down the process of thinking - which is necessary. 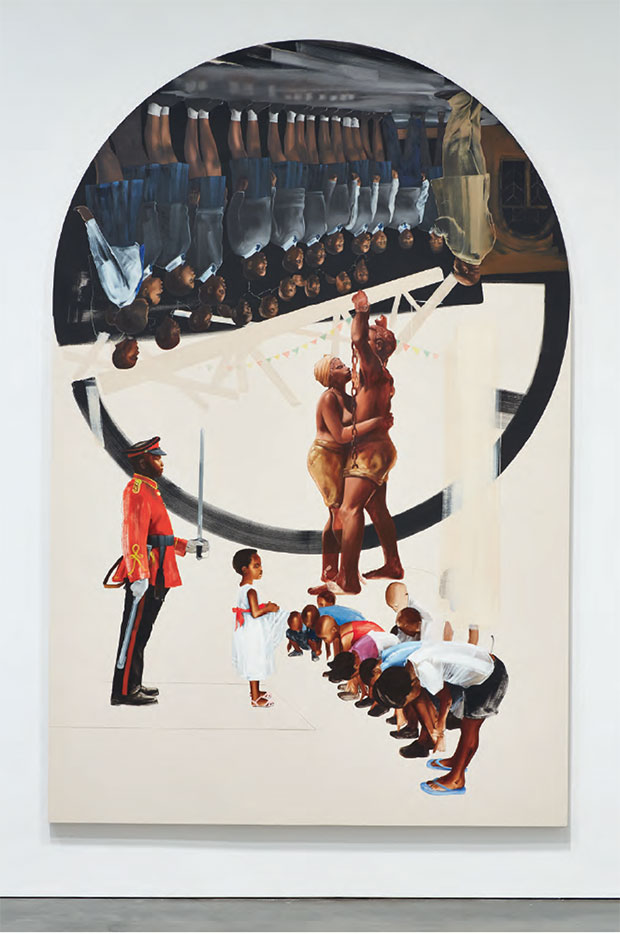 How does it fit together? I am not certain if it will all fit together. Any artist, I think, will tell you that it takes a long time to see how the work fits together - more so because what we do as practitioners, is guided not just by thinking and making, but also by our desires as individuals. And if there is one thing that psychoanalysis has taught us, is that it is impossible to know the cause for desire, rather we simply have to enjoy its symptoms. So I hope it comes together somehow, but if it doesn’t, then at least I would have been able to articulate a set of questions that I care about deeply.

What brought you to this point? I suppose democracy was the logical development from the previous project, which dealt with national identification and xenophobia, to mention a few. As someone who tries to negotiate the world with compassion and a certain level of criticality, the way in which particular publics are systematically denied access to state apparatuses that grant a movement towards self actualization and participation in governance (codenamed democracy), this has been bothersome to me, hence the current project, which tries to find ways of using representation to pose questions such as: if democracy is founded on the often impossible choice between exercising my nation-state granted freedoms as an individual and having to recognize the individual freedoms of another (my partner to interaction), then how can one reciprocate democracy, precisely because it is based on the simple idea of reconciling your relationship with everyone as a friendship – in the proper sense. That is, to wish the best for him or her. 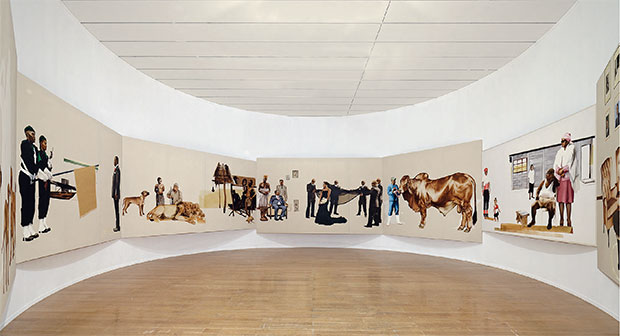 Can you control it? I do not think it is a matter of control. Again, what we do as artists is subject ourselves to conceptual time frames, and in doing so, we allow ourselves to be guided by things that are not always calculable. So for instance, even if you know what you want to make, the very fact of being in the studio, having the time and space to engage your body in making an art object – this comes with an amount of contingency, which is sometimes productive or not productive. In a way, this is why one has to develop a set of guiding rules so that things are not too open. But making art is a visceral act, so anything that is bound by the body, the unconscious and conscious, time and materials cannot be controlled. And even if I could totally control ‘it’, there is absolutely no way that I could control how the art object is read; in fact no one can really control how any one person is going to engage and interpret the semiotic material.

Have you ever destroyed one of your paintings? No.

What’s next for you, and what’s next for painting? I think painting is too old and complex for any one to be able to comfortably say he or she knows what’s next. But as someone who is not from the West but westernized, I think painting could use more of those practitioners and viewers who are not from the West, simply because such regions have a particular way of negotiating the world as well as understanding and manipulating language and representation. And I think this should obviously go beyond the current “African” fetish in the art world. There is always an other that the art world focuses on and fetishizes every two years or so, because some in the art world are either bored, have the imperial impulse to ‘discover’ or want to convince themselves of their openness and liberalism. But in time, these regions will have a sustained and critical contribution to the art world and its history.

Find out more about Vitamin P3 New Perspectives In Painting here. Check back for another Why I Paint interview with a Vitamin P3-featured artist tomorrow. And if you're quick, you can snap up works by many of the other painters featured in Vitamin P3 at Artspace - the best place to buy the world's best contemporary art. And be sure to check out more of Meleko's work at Meleko Mokgosi, Jack Shainman Gallery and Honor Fraser Gallery.