Is this the new Rain Room?

You didn't need a fine-art degree to appreciate Random International's 2012 installation at MoMA in New York and at the Barbican's Curve gallery in London. The Rain Room created an artificial downpour which, when a gallery-goer stepped into it, digitally alerted them where the drops fell, allowing visitors to walk through the rain without getting wet.

It was an amazing piece of work, that generated a not only huge amount of press, but also extremely long queues (as anyone who was in them will attest). To remain effective, the Rain Room only allowed five visitors in at a time. 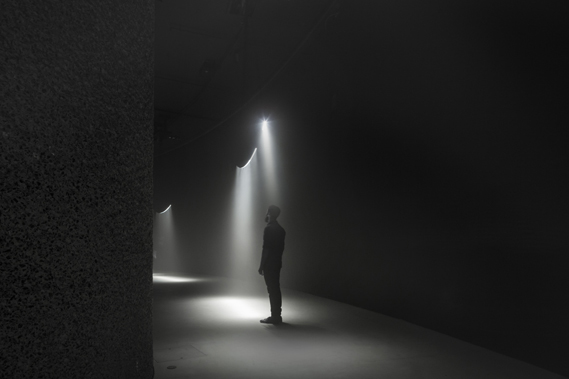 The Curve's new installation, Momentum, which opens today, allows 40 visitors in at one time; however, its creators, United Visual Artists, say, it too is designed to "mess with your perception of time and space."

Matt Clark of UVA describes the piece as consisting of twelve 'spatial instruments" or pendulums, each fitted with its own light and sound source. These swing, illuminating the curved gallery, while also serving as its only light source.

For some people, Momentum may not quite have the simplistic charm of the Rain Room, though it is the sort of thing that could - given a change of art direction - make for a great and thought-provoking theme-park ride.

Clark says the pendulums have been programmed to rock about naturally in some instances, and in an uncannily unnatural way at other points. "The tension between the synthesized and the natural is what we are most interested in," he says.

From the video, it looks as if Momentum rocks like a ship's cabin, a sensory-depravation tank, and nightclub. Visitors have the next three-and-a-half months to find out whether it really does mess with their perceptions; the show runs until 1 June.

For more on this go here. And for more on high-tech art, consider our book, Art and Electronic Media.