If only every in-flight safety message was this good

If you've travelled on Virgin Atlantic in the last few days you may have seen the new in flight safety film that precedes take off. And if you have seen it you'll know why we're writing about it! This is not the usual push up your tray table and turn off your iThings directive, but instead is a fun breeze through a series of classic movie genres - film noir, science fiction, western, adventure, etc: (disaster movie is wisely absent) - each one employed to get across a different, important in-flight safety rule. The invitation to adopt the brace position in particular has never been communicated with such elegant synchronisation.

It's called Trip and was made by east-London-based design studio Art & Graft. The four minute movie replaces the previous Virgin Atlantic safety film which has been around for 12 years and will ensure you'll never exhibit your usual apathy to inflight safety messaging again.

A scene from Trip - Art & Graft for Virgin Atlantic

Art & Graft's founder Mike Maloney says: "As with any project the film went through various iterations of script, storyboards, designs, content and treatment. We developed our ideas for 2-3 months, working through many animatic rounds before reaching a stage where we were happy to begin production of the final animation. The previous film had such an extended run we were keen to develop a stylistic approach that was equipped to stand the test of time."

To bring their ideas to life, the A&G team combined an illustrative approach with 3D and 2D animation techniques. All the character animation was produced using a traditional frame-by-frame technique which Maloney desicribes as "very labour intensive!" especially when creating a 6 minute film, but admit "the results look beautiful and are extremely rewarding!" 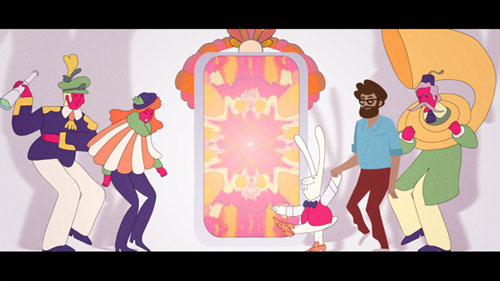 A scene from Trip - Art & Graft for Virgin Atlantic

"Elements throughout the film were modelled in 3D," he continues, "allowing us to ’wrap’ our illustrations around these models to keep the illustrative feel yet giving the scenes fantastic depth and space. This allowed all the camera angles to be planned out and ensure the 2D characters could then be animated in each scene with the addition of further textures and casted shadows." This approach apparently also allowed the camera to travel around and through the scenes, giving a rich and filmic feel to the animation as a result. Watch the whole thing below:

If you're a fan of this kind of stuff, and we can't see why anyone wouldn't be, you might like to check out our great books Art & Electronic Media, Futuretainment and for more static but no less cool ways to get across your all-important message check out Allan Fletcher's The Art of Looking Sideways which has been a staple in pretty much every design studio ever since we published it. Buy them all from the people who made them. And when you've done that head over to Art & Graft's site to see more of their great work.