Jordan Eagles - the man who paints with blood

An unusual show has just opened at the small Krause Gallery on New York's Lower East Side. Hemofields is the work of artist Jordan Eagles and all the paintings in it are created using copper, resin and animal blood.

Eagles came across the method while studying art at New York University in 1998. “I was dripping the red paint and it really wasn’t doing anything. It was too flat, and it was not bringing the images to life. So instead of trying to be symbolic with the material, I just went to a butcher down in Chinatown and bought a couple of containers of blood. I went back to my dorm room and began dripping the real blood on the images and it was immediately invigorating. There was something very alive about it."

Unlike say Damien Hirst's work which uses blood to point to our inevitable death, Eagles says Hemofields is all about life. The artist, who gets the oxen blood from a New Jersey butcher, recently told the New York Times.  “The fundamental, underlying theme that runs through all of my work is regeneration. “It’s taking something that is no longer living and bringing it back to life through art.” The show runs until October 16. Read more about Eagles in The New York Times. 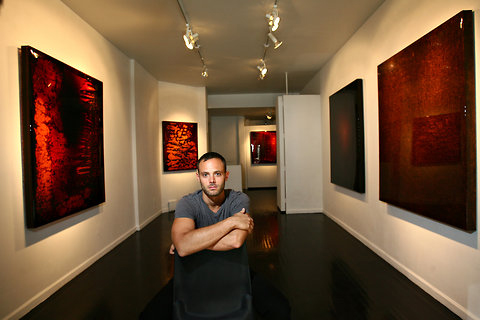