Do you struggle to make sense of gallery wall texts and some catalogues? Do you suspect that some art writers want to make you feel stupid? Do you think "horizontality" isn't really a word? Then you might be suffering from overexposure to International Art English.

In this brilliant study, the 42-year-old artist David Levine and the 29-year-old PhD student Alix Rule set out to uncover the origins of the kind of obscure and willfully complicated language common in art circles - circles other than Phaidon of course. Dubbing this prose style International Art English, the pair took all the press releases and announcements sent out by e-flux, the art world's leading email service, since 1999 and analysed them with Sketch Engine, an online service which allows users to pick out the occurrence of certain linguistic details.

Their findings were pretty telling. Phrases like "the real", "the void", and "multitude" occur far more frequently in International Art English than they do in regular uses of the language.

Similarly, outside of the art world, most writers believe that simpler sentences with fewer words are better than long ones. However, Levine and Rule find the reverse is true with IAE, citing this statement of the obvious issued to accompany Olafur Eliasson's 2008 installation Yellow Fog. The work "is shown at dusk-the transition period between day and night-it represents and comments on the subtle changes in the day's rhythm."

Where did this style of writing come from? Levine and Rule believe that, October, the influential New York journal founded in 1976, may have given rise to IAE. They write: "October's editors... ...saw contemporary criticism as essentially slovenly and belle lettristic; they sought more rigorous interpretive criteria, which led them to translate and introduce to an English-speaking audience many French poststructuralist texts. The shift in criticism represented by October had an enormous impact on the interpretation and evaluation of art and also changed the way writing about art sounded." 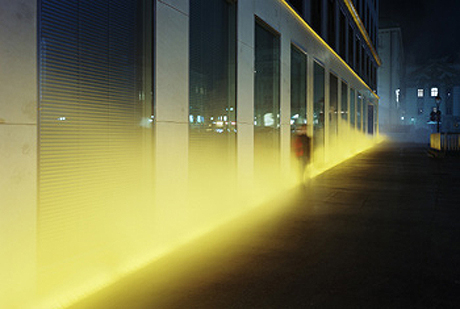 They then back this up with lots of neat little comparisons between IAE's peccadilloes and French language conventions, while also taking into account the heavy prose of the equally influential Frankfurt School.

These aren't bad conventions in themselves, but Levine and Rule suggest that, while October's articles could back up their highfalutin prose-style with serious academic credentials, the art world's less talented imitators started simply turning out bad prosaic impersonations of Georges Bataille.

They conclude by arguing that IAE has gone international, is used to lay claim to specious intellectual authority, and to make the more ludicrous assertions made about artworks sound more plausible than they really are. It is, in sum, a pretty comprehensive takedown.

While we at Phaidon love knotty art criticism when it's done well we certainly think Levine and Rule have made some great points. The article is a fascinating read, as is Andy Beckett's recent interview with the pair.

Meanwhile, for a no-nonsense guide to art world, consider our new book, Collecting Art for Love, Money and More, an accessible and easy-to-read insider look at a world that is so often made to sound too complicated.