With an illuminating text by Robert McCarter, who has developed a reputation and following for his meticulously researched, experentially-based, and jargon-free accounts of key figures in Modern architecture, this book provides the definitive study of Scarpa's many accomplishments, including such works as the Canova Museum, the Castelvechhio Museum and the Brion Cemetery, among others. 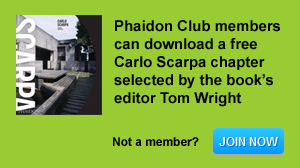 Our production controller Laurence Poos worked closely on the Carlo Scarpa book, ensuring that key design elements such as the open spine and the innovative use of cover finishing - not to mention the texture of the high quality paper - were executed to Phaidon's highest standards.

"The binding itself was key to the success of this book," says Laurence. "The designer suggested this particular binding because it ties in with a lot of the architecture Scarpa came up with. So it felt like a bit of an homage to his work. It's the first time I've organised this type of binding and it's always exciting to do something new and to explain it to your suppliers and get their advice how to create the best quality possible. Another interesting element of the specification is the white lettering on the cover combined with the cover finishing we used. We actually tried every single permutation of finish that could possibly work and, of course, this last one - the one we used - was the one that worked best! With the Scarpa book it's applied in such a way as to create a rough and smooth texture. It's something that Phaidon has never done before and it harks back to the idea of trying to get texture onto the cover to reflect the materials that Scarpa used in his work. So on the cover you have three different textures, three different looks.
SPECIFICATIONS 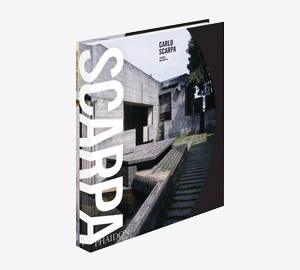 Carlo Scarpa (1906-1978) was a unique figure among second generation Modern architects, at once deeply embedded in the archaic and anachronistic culture of Venice, while also transforming the ancient city by weaving the most modern of spatial conceptions into its material fabric. To a degree unmatched by any other Modern architect, Scarpa stood in two worlds: the ancient and the modern - the particular historical place and the larger contemporary world. Through his work he forever joined these two worlds, constructing an entirely new interpretation of architectural preservation and renovation by producing works that integrate, engage and transform their place.
Couple CARLO SCARPA with these books to build an outstanding mid- century modern architecture library 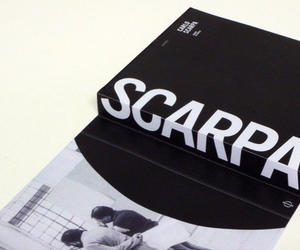