The Barcelona Pavilion minus its doors

As you're no doubt aware, Mies van der Rohe's Barcelona Pavilion (or to give it its correct name the German Pavilion at the Barcelona International Exposition) was completed by Mies in 1929, dismantled in 1930, then reconstructed in 1986 using photographs as the reference. As Detlef Mertins points out in our new book Mies, it appears "larger and richer in material variety and colour" than it does in the original photographs.

"With complete freedom of design, Mies gave his pavilion 'the peaceful form of a house'," Mertins writes,  "a modern country house ennobled and abstracted into a monument, raised on a podium, dissociated from everyday life and emptied of any purpose other than capturing the new spriit of the nation and the times.

"By 1924 Mies had already argued that modern architecture should go beyond the rational and economic fulfilment of functions to create architecture as art - a building-art capable of producing symbols of its time."

No wonder then that since its recreation in 1986, a number of artists, architects and designers have been attracted to and, indeed, invited to work on site-specific installations using the building.

Last year Spanish architect Andrés Jaque filled the structure with items found in the basement, while Japanese architecture duo SANAA installed a spiral of acrylic screens in 2009 and in 2008 Ai Weiwei replaced its two pools of water with ones full of milk and coffee.

One thing that's not widely known -  unless you've read Mertins' book - is that Mies originally wanted the pavilion to be photographed before its doors were installed, and it's this desire that Spanish photographer Jordi Bernadó has seized upon with the latest installation, removing the two glazed entrances and positioning them in front of the building's marble walls. 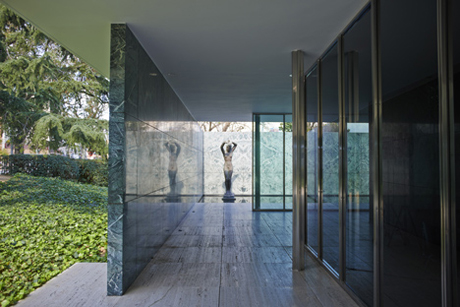 Mies referred to the Barcelona Pavilion as a "pavilion of representation" or as Bernadó puts it, "An ephemeral building whose maximum value was to represent an idea."

According to the photographer, "The aspect of the pavilion that has endured is therefore an evocation, not an object. A conceptual, not a material, act. A generator of thought, not a generator of physical space. Consequently, what remains of the Pavilion is the idea and its images," he says. It's an interesting point.

"The Pavilion existed in all its plenitude only when the doors were removed. The moment of the gaze is the only real moment," he adds.

In this way, Bernadó says he has "restored the image" of the building. "The pavilion once again becomes, temporarily, what Mies imagined. The doors ask the question. The building without doors is the answer," he adds.

New interpretation or not, Mies is a fascinating subject for anyone interested in how architecture became the backdrop to our lives. Check out our online Mies content to find out what Mies really meant by less is more, how he invented modern architecture and why Mies so divided opinion. And if you're ready to buy Detlef Mertins' masterful book Mies, you can do that here.