Why are these nudes in the Barcelona Pavilion?

When Ludwig Mies van der Rohe created the Barcelona Pavilion 1929, it was made to serve as a kind of exhibit-free exhibition hall. As Detlef Mertins explains in our new Mies book, “The pavilion was to be a space representing the new Germany, no longer fettered by old imperial and conservative ways but rather progressive, liberal and democratic.”

There were two exceptions to this no-exhibits rule: Mies' famous Barcelona Chair, and the figurative statue, Dawn, by the German sculptor Georg Kolbe, which was set into the pavilion’s reflecting pool.

“Standing in the northwest corner of the inner court, Kolbe’s siren-like figure of Dawn beckons from a distance and acts as a mediator in the experience of the pavilion,” writes Mertins, before going onto add, “an early plan shows three bases, suggesting that Mies initially thought to include two additional statues on in the large pool of the terrace and another in the alcove facing the garden path.”

Architectones at the Barcelona Pavilion (2014) by Xavier Veilhan

Ultimately, only Kolbe work was placed in the finished pavilion, and only one now stands in the building's latter-day recreation, in the Barcelona's Montjuïc park.

However, until the end of this month, Kolbe’s statue gets a little company courtesy of the French artist Xavier Veilhan. Veilhan’s installation in the Barcelona Pavilion forms the final part of the artist’s Architectones series, during which the artist has placed his works inside other well-known modernist landmarks, including Le Corbusier's Unité d' Habitation in Marseilles and the VDL House by Richard Neutra in Los Angeles. 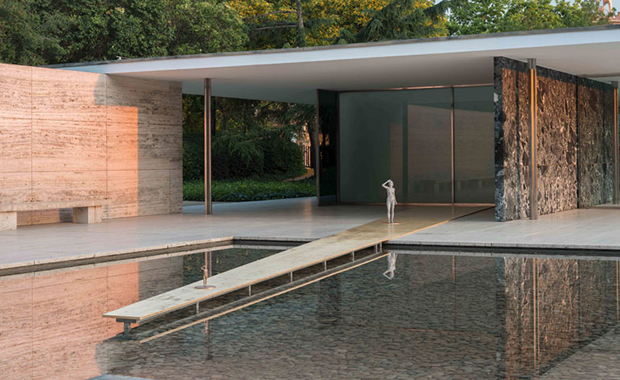 Architectones at the Barcelona Pavilion (2014) by Xavier Veilhan. Photo by Florian Kleinefenn

So, what should we make of Veilhan’s Barcelona additions? Well, his nude figures are made from bronze, aluminium, polystyrene and plywood, and so break away from Mies strict use of noble materials like marble, glass and steel. They’re set onto a series of walkways and platforms that interrupt the clear lines of the pavilion. Veilhan tells Wallpaper the work is about new perspectives on the figure in space, how we interpret the human nude and how we experience this “ultimate milestone of modernity”. 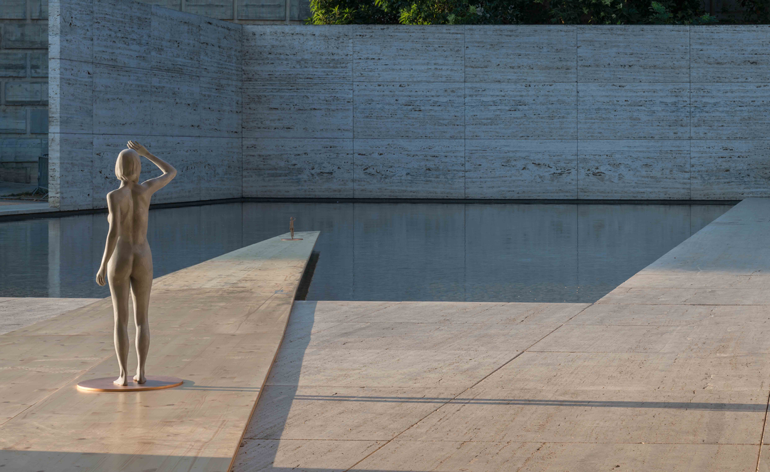 Architectones at the Barcelona Pavilion (2014) by Xavier Veilhan. Photo by Florian Kleinefenn

Do these new figures and lines of sight suggest novel ways to look at the environment Mies bequeathed to us? Are they reviewing Mies’ masterwork from a contemporary perspective? Are they even suggesting, contrary to the great man, that less might not be more? Perhaps.