LA’s car museum shifts up a gear with redesign

How do you get repeat visits to your venue? Restaurants tweak their decor and menu, shops rotate and update their stock, and museums and galleries host temporary exhibitions. Deep-pocketed institutions meanwhile, turn to the Big Architectural Statement.

With its planned 15,000sq ft of new display space, the Petersen Automotive Museum in Los Angeles is hoping to achieve this. But as an extra draw for museum-weary visitors, it's also giving the façade a bit of a makeover.

The attraction, which turns 20 next year, has brought in international outfit Kohn Pedersen Fox to liven up the cutting-edge 1960s building originally designed by Welton Becket, whose mid-20th-century buildings (including the famous 'record changer' Capitol Records Building), are strewn across LA.

Soon, this corner of Fairfax Avenue and Wilshire Boulevard will be a mass of gleaming metal which, at night, will be embedded with twinkling LEDs.

“Long ribbons of stainless steel will wrap around three sides and over the top of the deep red building, making a visceral statement that evokes the imagery of speed and the organic curves of a coach-built automobile,” according to the museum.

“People say to themselves, ‘There’s no reason to go to the Petersen – I’ve already been there,’” says museum chairman Peter Mullin. He hopes that these significant changes will turn repeat visits into 60% of the daily attendance. 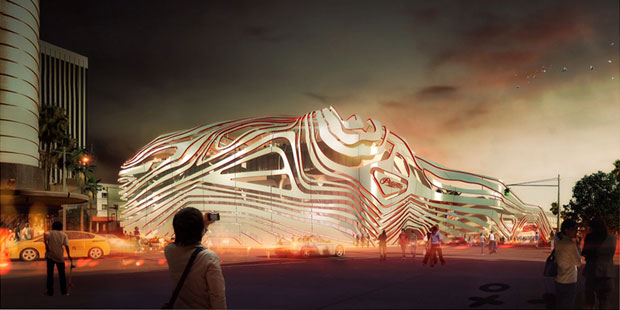