We don't usually run coverage of 'celebrity' shoe endorsements, but when the Brazilian grandee of Modernist architecture, Oscar Niemeyer, designs a range of Converse shoes, we're compelled to make an exception.

Better known for the ergonomic curves of Cathedral of Brasília and the Niterói Contemporary Art Museum, the Converse x Oscar Niemeyer range features five different styles of shoes. While the footwear doesn't differ starkly from Converse's other offerings, Niemeyer's philosophy is quite apparent in the smaller details. Perhaps the most noteworthy are the Chuck Taylor All Star Hi sneakers, which carry a hand-written print of Niemeyer's famous motto: "It is not the right angle that attracts me, nor the straight line, hard and inflexible, created by man. What attracts me is the free and sensual curve - the curve that I find in the mountains of my country, in the sinuous course of its rivers, in the body of the beloved woman." 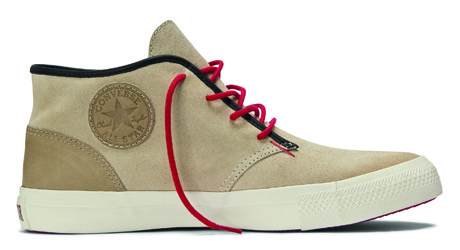 If this is the first time you've heard about Oscar Niemeyer (and don't worry, there's a first time for everyone), take a look at our book, The Curves of Time, Niemeyer's fascinating memoir which makes for a great introduction to the man and his work. In the book, Niemeyer recounts his life in an informal, fluid narrative that moves from his childhood in Rio, through to friendships with intellectuals and politicians such as Jean-Paul Sartre and Fidel Castro, to tales of adventurous road trips. It includes 40 specially-made sketches by Niemeyer, a chronology of his notes and an index.