What to expect from Kraftwerk at The Tate

Their name roughly translates as 'power plant', and so it is fitting that Kraftwerk, the revered German band formed 42 years ago in Düsseldorf bring their live retrospective to the turbine hall of the Tate Modern.

"As a former power station, Tate Modern's Turbine Hall is an ideal venue for Kraftwerk's explorations of technology, energy and rhythm,” said  gallery director Chris  Dercon following the group's announcement that they were to stage eight shows at the Tate. “Bringing together music, video and performance, these events will be true gesamtkunstwerk – a total work of art.”

And yet, what sort of work will it be? Dubbed KRAFTWERK - THE CATALOGUE 1 2 3 4 5 6 7 8, it promises to be  “a chronological exploration of the group’s sonic and visual experiments and presents eight classic master works from across their celebrated repertoire with spectacular 3D visualisations and effects.”

This London iteration – or, in non-art speak – UK dates, closely mirror the performances at New York's Museum of Modern Art, where the band played the same sets in the same order in April of this year. They are also booked to play a similar set of shows in January at the  Kunstsammlung Nordrhein-Westfalen in Düsseldorf. 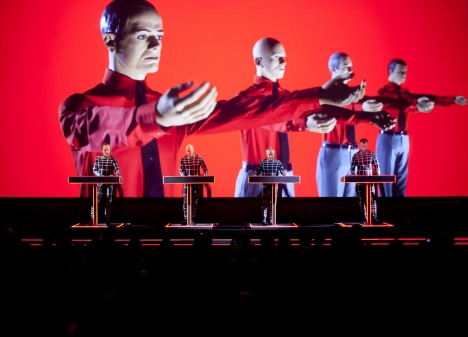 Klaus Biesenbach, chief curator at large for the Museum of Modern Art, told the magazine, “it’s a retrospective; it’s curated. They aren’t playing everything they ever recorded, any more than we could fill the museum with every photo Cindy Sherman has ever taken.”

Biesenbach is on-board for these Tate show too, alongside  Marion Ackermann, Artistic Director at Kunstsammlung Nordrhein-Westfalen and Catherine Wood, The Tate's curator of Contemporary Art and Performance and recent Phaidon.com interviewee; so we can expect a similar treatment.

John Pareles reviewing the Autobahn night at MoMA for The New York Times back in April, wrote, “Kraftwerk revisited the “Autobahn” album rather than reproducing its exact timbres and proportions.” He added that the music on that night “held on to its instrumental passages and the generally sombre melodic lines of the album’s other tracks but played them from a changed perspective — for instance, trading the album’s upbeat hints of 1950s and ’60s rock for something more steady-state.” Pareles also observed that the music from the album only took up about a third of the evening's entertainment, with the rest of the performance filled with a greatest-hits set.

To find out more, read the piece from The New Yorker here, The New York Times piece here, or watch a secretly filmed video from the Radioactivity night below. Though don't try this next February; cameras of all kinds are banned from the Tate on the night, by order of the German robots.