First major retrospective in 20 years for legendary American architect charts his pioneering use of concrete, his visionary urban plans and his continuing influence on the architecture of Southeast Asia

We're excited about this new major retrospective of Louis Kahn’s work at the Vitra Design Museum in Weil am Rhein. Unbelievably, it's the first in depth show on the architect in over two decades. It runs until August so there's plenty of opportunity to take it in.

Although relatively few of Kahn's designs actually got built – indeed he didn’t win a major commission until he was 50-years-old - the American architect, who died in 1974, defied pigeon-holing. Neither strictly a modernist nor a post-modernist, the uniqueness of his work, as the curators of the show point out, “lies in this synthesis of the major conceptual traditions of modern architecture – from the Ecole des Beaux-Arts and the constructive rationalism of the 19th century to the Arts and Crafts movement and Bauhaus modernism – enhanced by the consideration of indigenous, non-Western building traditions." More succinctly, Kahn's influence on the next generation of architects has been compared to that of Le Corbusier and Mies van der Rohe.

Kahn was a lover of brick and concrete, and those of his designs that did get built are pretty remarkable, like the Salk Institute in La Jolla, California (above), which was completed in the mid 1960s, the Kimbell Art Museum in Fort Worth, Texas, from the 1970s, and Bangladesh’s National Assembly Building in Dhaka, completed in the early 1980s. The organisers say the Dhaka building “can be viewed as the epitome of Kahn’s architectural work”. Indeed it was still under construction when he died of a heart attack in New York’s Penn Station. 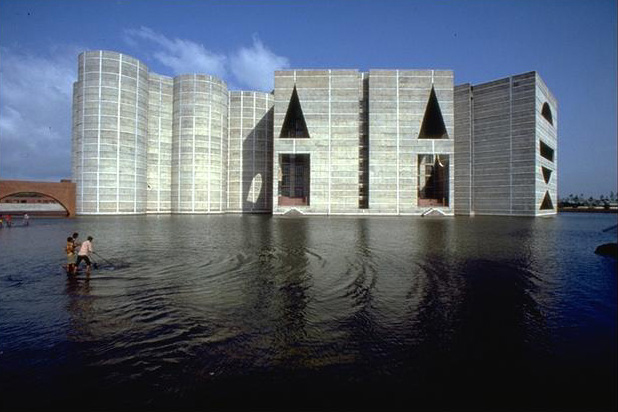 Entitled Louis Kahn – the Power of Architecture, the show is a feast of architectural models, original drawings, photos and films as well as illustrations Kahn made on his travels in watercolour, pastel and charcoal.

The film footage comes courtesy of his son Nathaniel Kahn, who directed the movie about his father, My Architect, which came out in 2003. For Vitra, Nathaniel has supplied previously unpublished footage.

The biographical introduction to the exhibition is followed by six thematic areas that illustrate the development of Kahn’s work over time. The leitmotif of this progression is found in Kahn’s quest for origins: in architecture and art, but also in the natural sciences — and even in the observation of human behaviour and society. 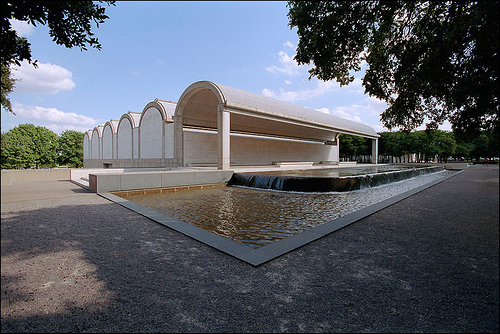 Kimbell Art Museum in Fort Worth, Texas - Louis I Kahn

The first section of the exhibition, entitled City, is closely connected with Kahn’s biography in its examination of his relationship to Philadelphia, which he came to regard as his home after immigrating to the US, and which became a kind of laboratory for the development of his own urbanistic and architectural principles. But the exhibition also charts his complex private life – alongside his marriage, he held down two other long-term relationships.

Kahn was a difficult character for clients to get on with, which goes some way to explaining why he won so few commissions. However, abroad he was able to really stretch himself and in Dhaka he realised his dream of constructing a city of the future. The scheme was beset with problems – from political unrest and war, to floods and storms – but the resulting work is a genuine monument to modern architecture.

If you can't make it to the Vitra museum our Louis I Kahn book is the next best thing - illustrated with photographs that convey the spirit and spatial qualities of Kahn’s buildings, as well as concept development portfolios with drawings and plans that reveal the inspiration and development behind each of his projects.