John Stezaker makes a movie out of film stills

The US premier of the British photo artist’s film, Blind, opens as part of a new show at the Petzel Gallery

Jean-Luc Godard, The great French director,  wrote: “Photography is truth. The cinema is truth twenty-four times per second.” Yet whose truth, exactly, is captured on those film strips?

For his new US exhibition, the 66-year-old British photo artist John Stezaker has drawn from his collection of old film lobby cards, the slightly larger film-still prints used to promote a new movie in more or less the same way a movie poster was used. Enlarging these images, he has excised the main figure and introduced instead, a silhouette. As he says, this series is “about the shadows rather than the light.”

The stills themselves are taken from the film noir era, and so suit this penumbral treatment. Yet the pictures could also speak to Stezaker’s cinematic experiences. His parents wouldn’t allow him to go to the movies when he was young, and so, growing up in Worcester England, he could only marvel at this promotional material, rather than the films it advertised. “That’s how I became fascinated with cinema,” he explains, “from a distance.” 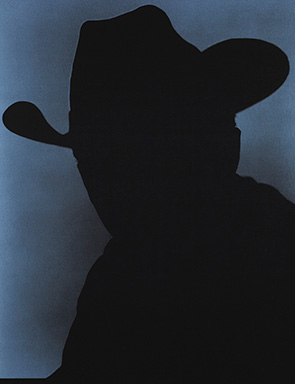 Stezaker’s initial depravation seems to have sharpened his aesthetic sense. His ongoing work with antique promotional images has seen him turn these rather tweedy, prim images into powerfully surreal collages. After years of relative neglect, Stezaker won the Deutsche Borse Prize in 2012; he’s also featured in our Vitamin Ph book, and continues to win praise for his photo montages.

These new screen prints deviate from Stezaker’s better-known cut-and-paste pieces, yet he has worked publicity stills into this new show in a newer way. This new exhibition, at New York’s Petzel gallery, also features the US premier of his 2013 film, Blind.

This short movie, which was shown in London last year, is entirely made up of film stills, screened at 24 images per second, the standard film projection rate. However, the stills don’t show a sequence of movements, but a jumble of images. You can pick out faces, and perhaps scenes, but the overall impression is that of an avalanche of scenes and figures, each suggesting plots and characters, but each brief and unknowable. Is this a frank representation of archival culture, an apt representation of the vast, unknowable Western cultural back catalogue, or a peek inside the mind of a young Stezaker, looking into those old, forbidden lobbies? Go to Petzel to find out. And if you're in London this week, you can see some of Stezaker's work at The approach stand E1 at Frieze.