One of our nuns is missing

Behind the scenes at The Art Museum

As Renaissance artists learnt their trade through a tradition of apprenticeship at a young age, we find fewer family dynasties of artists than we might expect. One such father and son dynasty is that of Fra Fillippo Lippi and Fra Fillippino Lippi, both of whom were in high demand for the richness and realism they brought to fresco painting. However, this was one dynasty that was never meant to be: their titles, ‘Fra’ (meaning ‘Brother’) may give you a clue why.

Filippo Lippi was ordained as a monk at the Sants Maria Del Carmine at the age of 14, but reportedly neglected most of his religious studies in favour of ‘scrawling pictures’ all over his manuscripts, as well as breaking into the neighbouring convent. Eventually, the prior allowed him to channel his dual passions for painting and womenfolk into producing the many beautiful Madonnas for which the monastery is now known.

Later in life, Filippo travelled the length of Italy, leaving behind charming frescos and scandal in equal measure wherever he went. One patron was even forced to lock him in his room so that he could complete a commission without being distracted, but to no avail: Filippo threw a sheet out the window and frolicked around Florence for two days before the patron caught up with him. Soon afterwards, Filippo was commissioned to produce a Madonna and Child for a convent, for which the painter asked if he could borrow one of their nuns, one Lucrezia Buti, to sit for him. After a suspiciously long wait, the convent received their painting but not their nun, who had by this point become pregnant with none other than Fra Filippino Lippi. 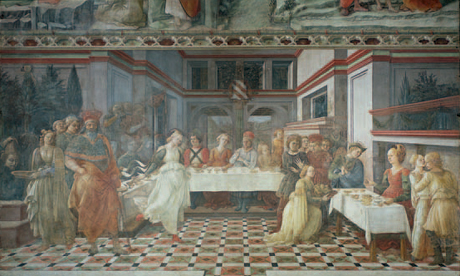 Despite a steady stream of well-paid commissions, Filippo and Lucrezia died penniless: run to ground by ever-escalating demands from numerous women for child support money, despite Filippo’s denying all knowledge of the little snappers. Fra Filippino Lippi, however, would grow up to eclipse his father as one of the great masters of the Renaissance.