As our great monograph, Álvaro Siza The Function of Beauty, reveals, the Portugese architect's interest in building and construction manifested itself very early on. At about 15-years-old he designed and built a shed in the garden of his parents' home, which served as workshop and study space for his brothers. Next came the remodelling of the kitchen in his grandmother's house, followed by a gateway for an uncle. Then there was a bathroom for a family friend, four semi-detached houses...well, you get the picture. So maybe it's no surprise to find him as driven as ever at the age of 81.

Last year he designed his first ever fire station, in Santo Tirso, Portugal, and now his offices for a major chemical plant in Jiangsu Province, China, are the Pritzker Architecture Prize-winner's first building in the country. The client, Por-Shih Lin, chairman of Shihlien Chemical, briefed the firm to come up with a new office building for one of its production plants in Huai'An City. His aim was to establish a world-class architectural profile for his operations. 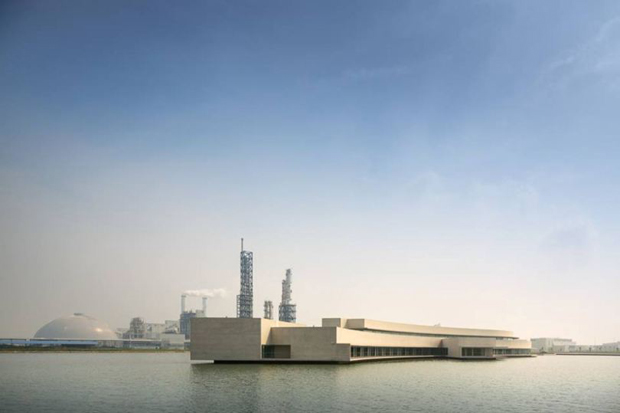 The Building on the Water, Jiangsu Province, China - Álvaro Siza

Called The Building on the Water, the two-storey, 300m-long extended horse-shoe structure is perched on an island in the middle of a 100,000m2 reservoir in New Salt Industrial Park. Siza designed the pristine form in white concrete, much of it exposed, to contrast with its green roofs.

“Contorting itself, the form escapes from convention, an autonomous entity contrasting with the orthogonal shapes of the factory complex,” says Shihlien Chemical. Employees access different departments, meeting rooms and the restaurant via pedestrian bridges, while a wider bridge links the building to the industrial facilities on land.

“Whether viewed from land, water or air, the elegant building conveys a quiet beauty achieved when the concrete and substantial comes in contact with the fluid and ethereal," says the client.

The Building on the Water, Jiangsu Province, China - Álvaro Siza

Highly-respected by the international architecture community, Siza made his name with a number of striking modernist buildings for his hometown Porto, including the Boa Nova Tea House, the Faculty of Architecture and the Serralves Museum of Contemporary Art.

Not only is this Siza’s maiden project in China, it is the first time he has built over water. The Building on the Water, which took five years to design and construct, is to be inaugurated on 30 August.

The updated version of Álvaro Siza The Function of Beauty is published in September but you can already pre-order it here. It highlights 20 of his major projects, known for their stark lines, geometric clarity and startling experiences of space. Meanwhile, five of Siza's most recent projects are featured on his practice page in the Phaidon online Atlas our great online resource, database and utopia for architects and the architecturally interested. You can take a free trial here.