How Judy Chicago made a feminist masterpiece

Are monumental works of art always masculine? It’s hard not to see something a little butch about the massive, important sculptural undertakings the Washington Monument to the Easter Island statues to Nelson’s Column, right up to and including Anthony Caro and Richard Serra’s huge steel artworks.

Yet here is one hugely popular monumental artwork, measuring 1463 x 1280 x 91.6 cm (48 ft x 42 ft x 3 ft) in California around 40 years ago, that utterly eschews any masculine values, and, indeed, lies at the centre of a movement commonly described as feminist art. Here’s how we describe it in our book, Art and Feminism:

“Thirty-nine place settings, each commemorating a female historical or mythological figure, are placed around an equatorial triangle, formed from three tables. Each of the thirty-nine women is represented on a hand-painted plate by an abstract form based on ‘central core’ vulvic imagery: an embroidery and a chalice. On the base tiles are inscribed a further 999 names. The work’s chronological sequence traces the social origins and decline of matriarchy, its replacement by patriarchy, the institutionalization of male oppression and women’s response to it. The work toured internationally and attracted among the largest crowds ever to view a museum exhibit.” 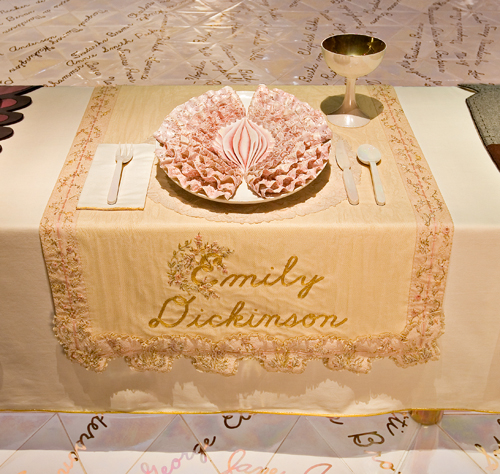 The work, is, of course The Dinner Party by Judy Chicago. Chicago, born Judith Sylvia Cohen on 20 July 1939 in Chicago, Illinois, began her career as a fairly conventional minimalist painter and sculptor. Yet her interests turned towards feminist politics and gender equality, during the rise of second-wave feminism and women’s liberation movements in the 1960s and 70s.

Some of her early feminist works had a fairly bleak, combative tone, though this changed with The Dinner Party, which the artist originally conceived as a celebratory redress of The Last Supper from “the point of view of those who’ve done the cooking throughout history,” using traditionally effeminate art forms such as needlework and ceramics. 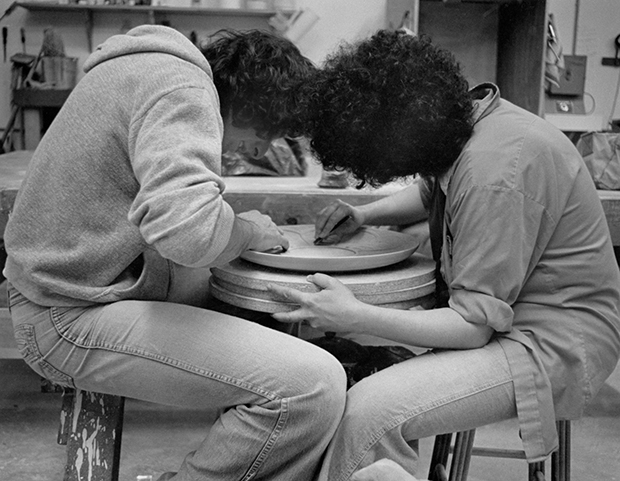 Leonard Skuro and Judy Chicago working on a plate for The Dinner Party. Image courtesy of the Flower Archive

The Dinner Party has places for women whose position in history is fairly well assured, such as Boudica and Queen Elizabeth I, Virginia Woolf and Georgia O’Keeffe; more obscure figures, such as the ancient Greek mathematician Hypatia and the 20th century birth control advocate Margaret Sanger; and mythical women and female gods, such as Kali and Ishtar.

The three sides of The Dinner Party represent different periods: one side is for ancient and prehistoric women, up to and including the Roman Empire; another for the Middle Ages; and another for the modern period. Those who aren’t awarded a dinner setting, can still find a place on the tiled floor, which carries the names of a further 999 women.

Though Chicago was consciously referencing Christ’s last meal – an all male dinner party – and chose an equilateral triangle to represent equality, the shape of the work is also a vaginal reference, a biological gender reference that extends into smaller details in The Dinner Party. 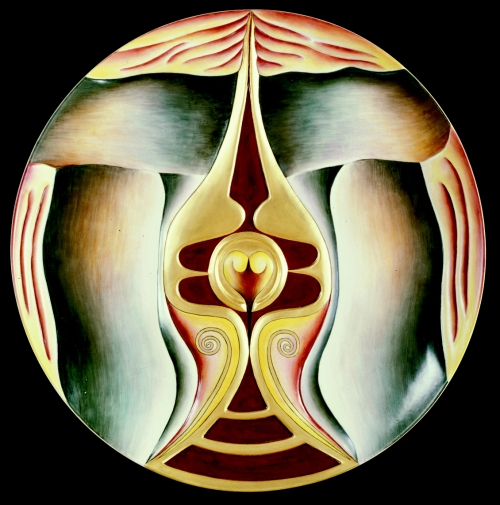 “Each woman is represented by a unique place setting consisting of a needlework runner symbolizing her personality and attainments and a hand-painted plate with a symmetrical motif variously evoking flowers, butterflies and vulvas,” explain Phaidon’s editors in Body of Art.

Chicago persuaded around 400 volunteers to help her complete the work, assisting in everything from embroidery to biographical research. While most of these assistants were women, a small number of men also contributed to The Dinner Party, which was completed over the course of four years in Santa Monica, California.

Opening on 14 March 1979 at the San Francisco Museum of Modern Art, The Dinner Party drew 5,000 visitors on the opening night, a total around 100,000 during the work’s three-month run, and an estimated one million viewers, following an impromptu worldwide tour. These were incredibly high figures for so unusual and relatively obscure artwork.

Today it is regarded as a pioneering work, influencing the 20th century Pattern and Decoration movement, as well as a later generation of artists, including Grayson Perry and Tracey Emin. 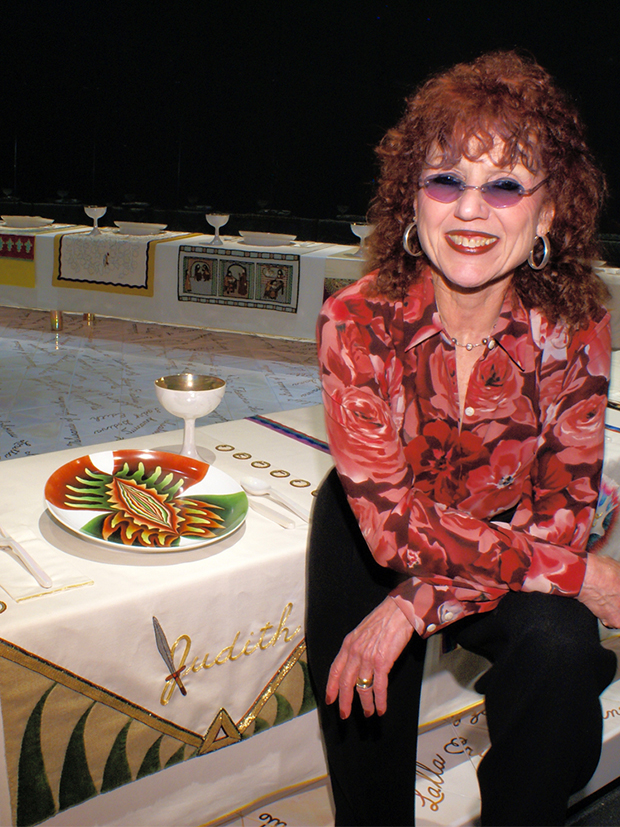 Given all this attention, some commentators found reasons to dislike the work. A few saw the inclusion of mythical gods alongside real feminist pioneers as unfocussed; others argued that, a work of art, it was hectoring and overly didactic. Some picked out lesser concerns. “Were vulva-based dinner plates women’s kitsch?” writes Peggy Phelan in Art and Feminism, “Did Chicago exploit the work of the other artists who helped create the installation?”

Forty years on these seem like petty concerns. The Dinner Party, which is on permanent display at the Brooklyn Museum in New York, and remains an on-going reminder of historic gender imbalance.

For more on The Dinner Party’s place in feminist art order a copy of Art and Feminism; for more on its significance as a work of bodily art get Body of Art.