Earthquake hit Christchurch Cathedral to be rebuilt with cardboard

One year after the New Zealand earthquake, architect, Shigeru Ban uses his trademark materials to replace the 19th Century building

Shigeru Ban, the architect for whom paper and cardboard tubing are materials of choice, has been commissioned to build the temporary replacement for the Christchurch Cathedral which was reduced to rubble in last year's New Zealand earthquake. 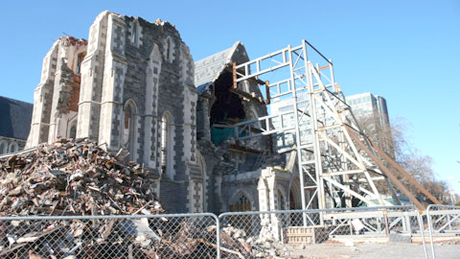 Christchurch Old Cathedral was destroyed a year ago

The recyclable replacement is to be constructed from 86 cardboard tubes which will create a main A-frame supporting a large stained glass window. "A cardboard structure will stay in the minds of people for ever," Ban says of his new commission.

This is not the first time Ban has turned his talents to helping disaster affected regions - he previously designed temporary housing after the earthquake which hit Japan in March.

Follow the link to see more images of the cathedral on ShigeruBanArchitects.com