The Pritzker-Prize winner outlines his plans for The New York Public Library's Stephen A. Schwarzman Building

He oversaw the reconstruction of the Reichstag and the reworking of The British Museum, so when another august Neoclassical institution wanted its building improved, there was one obvious architect for the job.

Foster + Partners $300m (£180m) plans for the New York Public Library's Stephen A. Schwarzman Building on 42nd Street and 5th Avenue, next to Bryant Park in Manhattan, have yet to be approved by city authorities. However, it seems unlikely that the combined wishes of the library's president and CEO of New York Public Library, Tony Marx, and Lord Foster will go entirely unheeded, not least because the proposals seem so obviously beneficial to the library's two differing core audiences. 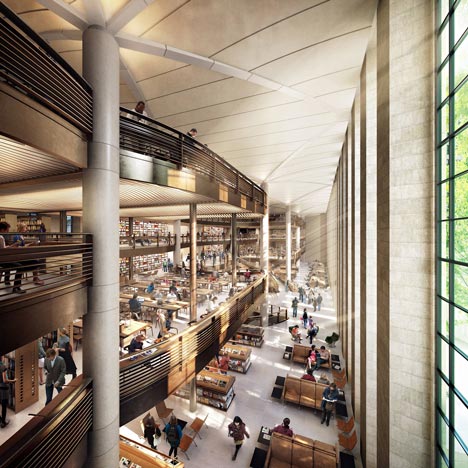 The problems presented by library stem from its dual role as both a public library, allowing anyone in from the street, and its research duties, offering access to the hundreds of thousands of books in its collection to authors and academics. According to reports, the book stacks are mouldering, while the public facilities need to keep pace with the times.

Foster's proposals move the voluminous staff-only stacks from the building's western edge and replace them with a 100,000-square-foot public reading space overlooking Bryant Park. The books will then be stored in a climate-controlled facility already in existence, underneath the adjacent park.

From these renderings it certainly looks a beautiful and elegant solution. In a video address, Marx described his desire to “take an amazing historic building and make new additions to it that are respective to the original.” Click on the video for more, including Foster's claims that the changes will open up an additional third of the library's space to the public.

For more equally bold new architectural projects, take a look at our Atlas of 21st Century Architecture, which features over 1,000 oustanding buildings founded since 2000.