Construction permits were granted last week for the Broad Museum, soon to rise up among other landmarks of Los Angeles’ Downtown, and due for completion late 2013. Squaring up to its immediate neighbours – Frank Gehry’s iconic Disney Concert Hall and Arata Isozaki’s subtler Museum of Contemporary Art – the new museum will house the collection of LA philanthropists Eli and Edythe Broad. Aside from funding the building, they are endowing the museum with $200 million – more than the endowments of the Los Angeles County Museum of Art and MOCA combined.

Designs were unveiled by architects Diller Scofidio + Renfro last year. Elizabeth Diller said at the time, "Our goal for the museum is to hold its ground next to Gehry’s much larger and very exuberant Walt Disney Concert Hall through contrast. As opposed to Disney Hall’s smooth and shiny exterior that reflects light, The Broad will be porous and absorptive, channeling light into its public spaces and galleries." 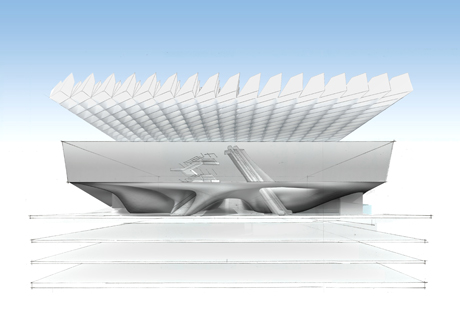 Architectural rendering of the Veil

The architects plan to achieve this through a cast concrete ‘veil’, a honeycomb structure that will appear to drape over the solid mass of the ‘vault’ – containing storage spaces for the Broads’ extensive collection of contemporary art. The exhibition gallery, nearly an acre of column-free space filled with diffused light filtering through the ‘veil’, will sit on top. 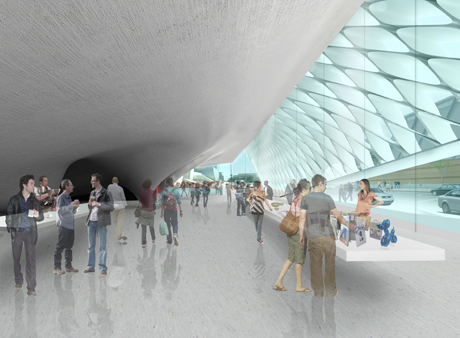 Interior lobby of the Veil

Contractors have been hard at work on the site for months already, but so far it is only the three-storey parking garage that has been completed on behalf of the Community Redevelopment Agency. Parking, a perennial sticking point in Los Angeles’ architecture, is even more critical in the Downtown district which, despite being perhaps the closest thing LA has to a pedestrianized precinct, is still plagued by traffic problems and prohibitively expensive private car parks.

The Broad Museum, as it will be known, is not to be confused with the Broad Museum of Contemporary Art (not in fact a museum at all, but a building within LACMA, designed by Renzo Piano and opened in 2008) nor with the Eli and Edythe Broad Art Museum. The latter, a Zaha Hadid building currently being finished off in time for a September opening, is at Broad’s alma mater, Michigan State University. 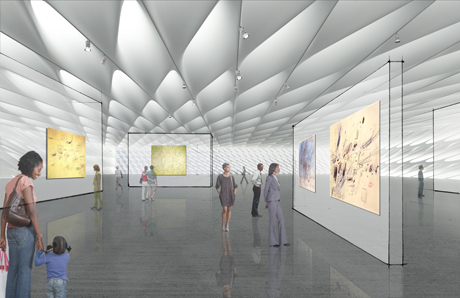 Interior Gallery of the Veil

The Broad’s closest neighbours, MOCA and the Disney Concert Hall, have both also benefitted from his generosity. When it looked like plans to build the Disney Hall were about to fall through in 1996, Broad reinvigorated the fundraising with his own donations. And in 2008, as a lifeline to the floundering MOCA, of which Broad is a founder and life trustee, he offered $15 million in matched funding, a sum that MOCA has yet to fully realise. Broad’s pervasive philanthropy has ensured that he will cast a long shadow across the city for years to come.

If you're a fan of cutting edge modern architecture and haven't bought Phaidon's incredible Atlas Of 21st Century World Architecture yet you're really missing out on something quite special. The large version contains over 1,000 of the most outstanding works of architecture built since 2000 by internationally acclaimed as well as emerging stars of the architecture world. It includes every imaginable building type from the smallest houses, cafes and wineries to the largest museums, airports and embassies. The portable, travel edition is a condensed version of the main book but adds 50 new buildings and additional city maps to help you locate each building and create your own architour. Both are in the store now as is our equally beautiful monograph on Arata Isozaki. View other stories on the architects mentioned in this piece including Zaha Hadid, Frank Gehry, and Renzo Piano. And do let us know what you think of Diller, Scofidio + Renfro's plans in the comments box below.