Is this what's in store for London's High Line? 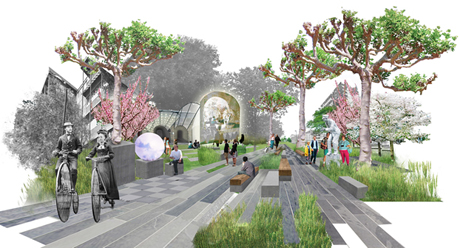 Vauxhall, on the south bank of the Thames just to the west of Westminster Palace, was once known for its pleasure gardens and hot air balloon ascents. Now it is home to the British security service MI5, a thriving club scene, and some pleasant parkland. It has some great art spaces too, including Gasworks and Beaconsfield, with more arriving soon; Damien Hirst's own gallery is due to open here in 2014. The US Embassy is also due to relocate to a new complex at the region's south-western edge, on Nine Elms Lane, in 2017.

However, the area is bisected by busy roads and railway tracks and lacks a clear sense of continuity. The RIBA competition, dubbed The Missing Link, asked architects and designers to draft a linear park, "to reconnect the disjointed parts of the neighbourhood, to build a better visual perception of Vauxhall beyond its roundabouts and roads and to create an identifiable pathway and narrative through the area, linking the railway arches, green spaces and public art into a distinctive place once again." 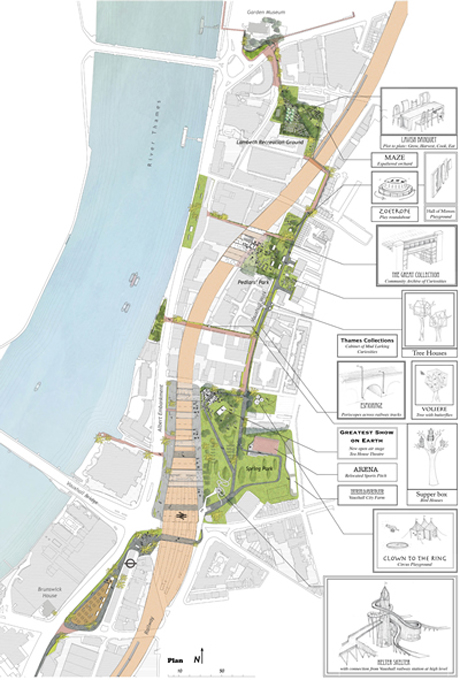 The winning entry, by Erect Architecture and local design practice J & L Gibbons, is called The Promenade of Curiosities, and draws its inspiration from John Tradescant, a 17th century naturalist and collector, who pioneered the concept of a cabinet of curiosities, and who's buried in the grounds of Vauxhall's Garden Museum. 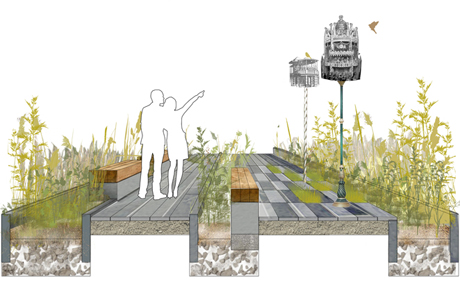 Halfway between an amusement park and a landscaped walkway, the Promenade will connect together Vauxhall's disparate parts, while entertaining visitors with a series of installations, drawing from the region's rich and varied history. The park isn't elevated, though it does incorporate The High Line's mix of cultural and natural attractions.

These winning illustrations might seem a little whimsical, yet we hope The Promenade of Curiosities manages to realise at least some of these slightly fanciful designs to unite what is a rather heterogeneous area and have some fun while doing so.

To find out more about The Missing Link go here. For greater insight into the contemporary built environment, please take a look at our Atlas of 21st Century World Architecture. But before you do any of that join Phaidon Club, in order to gain points with any purchase you make and gain exclusive access to some great offers and events.