It is not usually the case that architects strive to make their projects less visible, let alone invisible. However Pasadena, California and Seoul-based GDS architects has just won the second competition phase for a sky-high project named _Chenhna City Tower _or _Tower Infinity _which aims towards invisibility through the use of specially positioned optical cameras and LEDs to create a reflective skin on the building.

The firm has found inspiration in the design ethos of Louis Kahn, one of the most influential architects of the 20th century. Charles Wee, Design Principal at GDS Architects says, "Rather than fall victim to trying to compete with the great iconographic landmarks of the world or develop another version of the “tallest observation tower”, our heart, minds and motivation set out to represent the power of 'absence' and the strength of 'nothingness' often referred to by Louis Kahn.” Kahn aimed to create architecture with the same monumentality and spirituality as the ancient ruins he had seen on visits to Greece and Egypt. 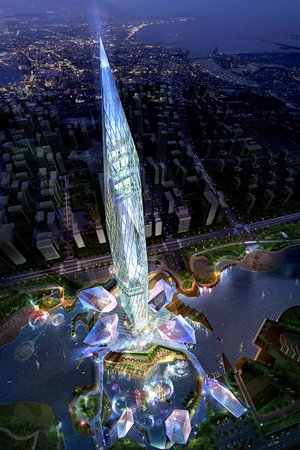 With the aim of creating a more stimulating user experience with the structure, the firm has also created a ‘Views from the world’ scenario by which travellers in the elevators are rewarded by iconic views from the world's tallest buildings. Michael Collins, Senior Associate at GDS explains: "Users enter the elevator and upon ascent to the observation level, begins a user experience where all walls transform into actual views at their corresponding heights from significant observation towers/buildings around the world. This simulated experience is not intended to replace the actual experience, but inspire people to travel to these worldly destinations and discover an interest in cultures other than their own.”

GDS won the first phase of Korea Land Corporation’s design competition in March 2008 from 146 entries from 46 countries. The architects previously created the _Miram Skypark _(2008) in Busan, South Korea and the Tripolis Kolon Development in Boondang (2001) .

The new development will cover over one hundred thousand square metres of site space and will include a culture park, indoor water park, museum, sports fitness facilities and one of the world's highest tower observation decks at 392m (the tallest being in the _Canton Tower _in Guangdong, China at 488m).

The project is being developed with Samoo Architects & Engineers as well as Arup and is hoped to be completed in time for the September 2014 Asian Games, the largest sporting event in Asia.