What is Australia’s most striking work of architecture? LAB Architecture's BMW Edge building? Maybe the residential houses built by Glenn Murcutt or the innovative work of Sean Godsell? And what about Sam Marshall's new Museum of Contemporary Art? The default answer, of course, is usually Jørn Utzon’s extraordinary Sydney Opera House (1957-73), a supremely elegant if somewhat politically problematic articulation of the nation’s journey from the ‘terra nullis’ (or ‘no man’s land’) encountered by white colonialists in the 18th Century to sophisticated urban Modernity.

For moviegoers of a certain generation, however, it is not the Opera House that grips the imagination, but its dark future twin. This is the Thunderdome, a terrifying building - part palace of rough justice, part entertainment venue - that is the true star of the third, final and by some distance silliest of the late 1970s and early 80s Mad Max films. We close our month-long focus on Austalia with a look at the architectural inspiration for the dystopian action film.

In the structure’s rusted cupola, which borrows its form from the visionary American architect Buckminster Fuller’s celebrated geodesic domes, directors George Miller and George Ogilvie stage a fantasy about Australia’s return, following a nuclear Third World War, to frontier territory. The Thunderdome, it seems, is what we will get when the values that built the Opera House give rise to Armageddon, and the survivors begin the project of ‘civilisation’ anew. 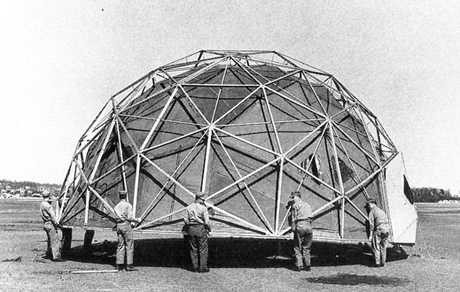 At the beginning of Mad Max Beyond Thunderdome (1985), Mel Gibson’s titular road warrior fetches up in Barter Town, a seedy settlement in the post-apocalyptic Australian desert. Ruled by an uneasy coalition comprising Aunty Entity (Tina Turner, dressed like an effeminate Transformer) and Master Blaster (a genius dwarf strapped to the back of a giant dunce), Barter Town is built on top of a vast, subterranean pigsty, the porcine inhabitants of which are farmed for their faeces, the townsfolk’s sole energy source. Life here is pretty grim, what with high levels of background radiation (and hair metal fashions) but the locals find solace in a unique architectural landmark, the looming Thunderdome. 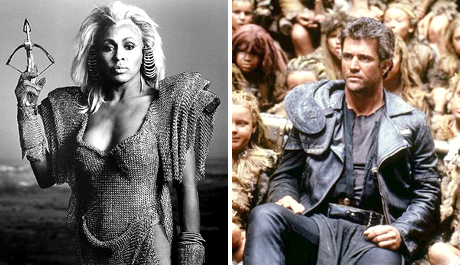 Tina Turner and Mel Gibson in Mad Max Beyond Thunderdome (1985)

Given the Mad Max movies’ post-apocalyptic mise en scène, we might imagine that the Thunderdome once did service as an all-weather tennis court, or perhaps the atrium of a shopping mall, or even a private house built by an antipodean Fuller fan. Stripped to a bare iron skeleton by the howling nuclear winds, it has now become a gladiatorial arena, a new Coliseum risen from the ruins of 20th century culture where combat has but one simple rule: ‘two men enter, one man leaves’. Overseen by Aunty Entity, (a woman whose name recalls both the reality TV show Big Brother and ‘Aunty’ BBC) death matches in the Thunderdome are referred to as ‘episodes’, and are presented in the manner of a TV game show with a campy compere, Dr. Dealgood. Hanging off the dome’s exposed beams, the townsfolk hoot and holler for blood, handing the combatants' weaponry (chainsaws, massive hammers, wicked looking maces) as they lunge and flail on the end of elasticated bungee ropes.

Every building speaks of the society that built it, and the Thunderdome is no exception, although it would be a mistake to equate it too directly with its obvious precursor, the Roman circus, where vicious spectacles were offered up to the population as a kind of politically becalming opiate. As Dr. Dealgood reminds us before Max and Blaster are joined in battle: ‘This is the truth of it. Fighting leads to killing, and killing gets to warring. And that was damn near the death of us all. Look at us now! Busted up, and everyone talking about hard rain! But we've learned, by the dust of them all... Barter Town learned. Now, when men get to fighting, it happens here! And it finishes here!’

The Thunderdome, then, is not primarily a place of barbaric amusement, but the bedrock of Barter Town’s post-apocalyptic social contract, a place in which local violence functions as an anxious guarantor of global peace. Listening again to Dealgood’s speech, it’s hard not to hear a faint echo of Buckminster Fuller’s observation that ‘the end move in politics is always to pick up a gun’. (We might also detect, in Barter Town’s steaming pigsties, a subscription to the architect’s belief that ‘pollution is nothing but resources we are not harvesting’). Perhaps when Aunty Entity first began the long business of building a new world out of the nuked rubble of our civilization, she chanced across a charred copy of Operating Manual for Spaceship Earth (1968), Fuller’s great work about the future survival of the human race. If so, Thunderdome is surely her (very twisted) monument to him.