The Dutch are very good at making cycling work for them. Think of Amsterdam's 1965 White Bicycle programme, pre-dating London and Paris' cycle sharing schemes by almost 40 years, or the country's much-loved multi-storey cycle racks, which you see beside many Dutch train stations.

Now cyclists pedalling between the cities of Eindhoven and Veldhoven have got their own roundabout-style flyover. Bridge specialists IPV Delft call it the Circular Hovenring Cyclist Bridge, and it soars over the Heerbaan-Meerenakkerweg intersection, looking more like a open-air velodrome than a humble cycle route.

The Hovenring was a solution to an existing infrastructure problem. There used to be a crossing at this spot, but when a housing estate went up nearby, the increase in traffic meant the road layout had to change. Eindhoven City Council eschews underpasses for cyclists, and it did not want a conventional roundabout.

IPV Delft’s creation is a marvel: the deck of the overpass is attached via two dozen steel cables to a 70m-high pylon in its centre, making the whole thing look a bit like a maypole, or the stays of an old-fashioned, floor-length skirt. 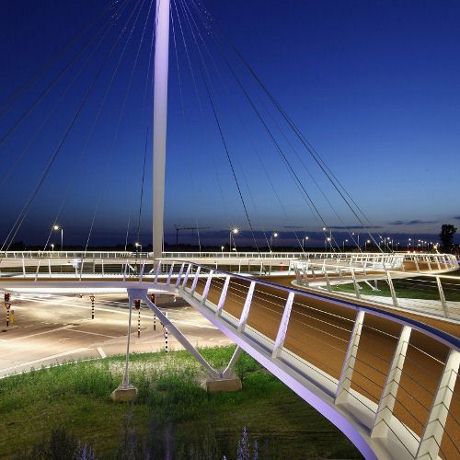 Given Eindhoven’s ‘City of Light’ strapline (it being the home of light-bulb manufacturer Philips), it made sense of IPV Delft to include plenty of innovative illumination. There’s a ring of light around the cycleway’s edge at night, LEDs embedded in the railing, and bulbs attached to the cables.

Interestingly, the designers also persuaded the local council to lower the roadway, rather than raise the Hovenring unduly, and so have ensured that cyclists and pedestrians didn’t have to climb too much of an incline to get onto the bridge. Now that’s a sacrifice less enlightened nations may not have been willing to make.

For more on the story see IPV's site, and for more ecologically sound design and architecture solutions, consider our Vitamin Green book, an up-to-the-minute look at the single most important topic in contemporary design: sustainability.