In this climate of activity-based working and flatter and flatter office hierarchies, we might be led to believe that the boardroom is becoming obsolete. Surely, these days everyone from the intern to the CEO rubs shoulders in the staff canteen, or chills out together on comfy sofas.

That may be the case in some territories, but in more traditional environments, the boardroom is still very much an item. US furniture company Steelcase highlights this in its workplace report, 360degree Culture Code. In the Netherlands, for example, “executives don’t need or want traditional dedicated suites” and “the Dutch prefer workspaces that feel more like homes or clubs.” Whereas in Moroccan culture “the executive office is sacrosanct” and “informal collaboration is a new behaviour”.

Skidmore Owings and Merrill (SOM) is making sure it stays that way in the Middle East too, by giving the boardroom pride of place in its HQ for Mashreq Bank in Dubai. 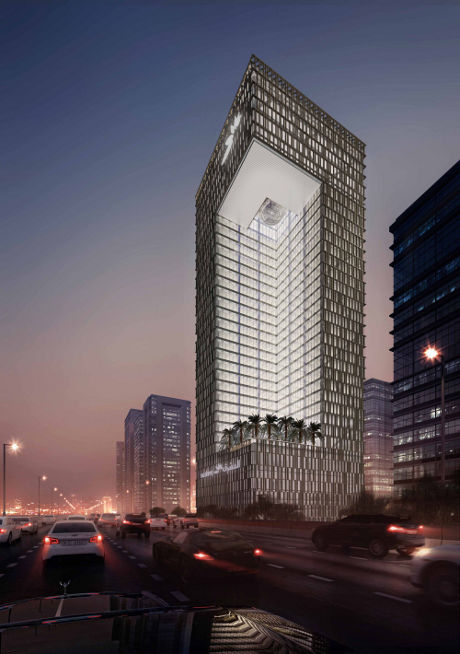 The firm, better known for Dubai's Burj Khalifa – the world's tallest man-made structure – has been commissioned to build this 32-storey block, which SOM Design Director Ross Wimer says will “act as a quiet sculptural form within Dubai’s skyline.” Nevertheless, the plans look striking, bringing to mind such modern masterpieces as Rem Koolhaas' CCTV Headquarters in Beijing.

The 32-storey block has a smaller chunk sliced out of it at one corner, making the square base only eight storeys high. The top floors of this lower portion house staff dining areas and a landscaped garden of palm trees. The next 20 or so storeys are L-shaped, while the cantilevered top floors are square again, and hang over the base.

So, can you spot the boardroom? Well it's housed in the lowest floor of this upper part, literally suspended over the palm trees below. Whether workers on their lunch break will be able to glance heaven-ward at the folds of their bosses’ thobes sweeping across the boardroom floor is unclear. Most of the building is glass walled, but SOM is yet to say whether this includes the boardroom’s flooring.

For more on this project, go here. For greater insight into and excitement around modern architecture, please take a look at our new Phaidon Architecture Travel Guide App as well as The Phaidon Atlas of 21st Century World Architecture.