Is this the smartest railway ticket office ever?

Designed to look like a jewel, the greenest building in Sweden breaks ground in the new year

“The basic architectural idea was to create a sculptural, eye-catching jewel of a building,” says Stockholm architecture practice Utopia Arkitekter of its new building Juvalen, on which work starts in the new year.

It's a shimmering office block in Sweden’s fourth biggest city Uppsala, 70km north of the capital, and will be clad in shards of metal and glass. Its name is inspired by its facade - ‘juvelen’ is Swedish for gemstone. Or, as the architects put it “a gemstone whose facets mirror different aspects of the Uppsala region.” 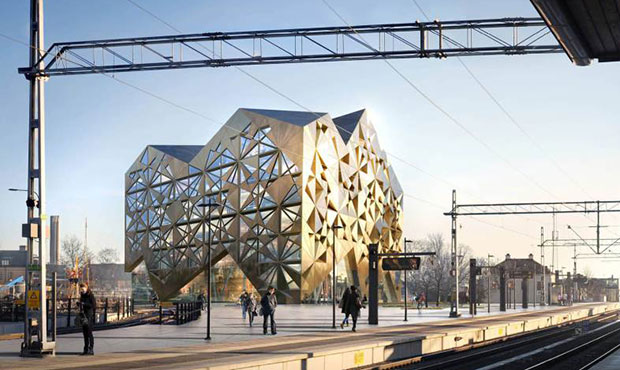 It’s also intended to be the most energy-efficient building in the country. The triangular golden pieces of metal will be positioned at angles on the façade so that they stop the structure from over-heating in the summer. What’s more, the roof will be clad in solar panels. The biggest shards of metal will anchor the building to the ground.

The team at Utopia says "The Jewel will be an international showcase of how to create a beautiful, architecturally interesting building  with an emphatic sustainability profile.”

It's earmarked for a plot next to the Uppsala Central Station, built in 1866 by Adolf W Edelsvärd, who was head architect of the Swedish national railways for 40 years. This new building houses the Uppsala Resecentrum (Uppsala Travel Centre) on the ground floor. 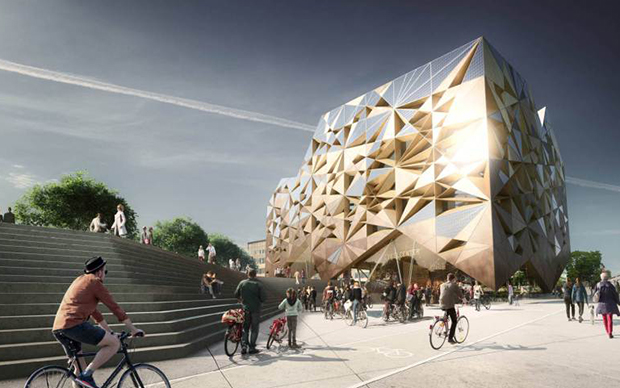 This is a lofty space with a wooden ceiling that will act as a waiting room and ticket desk for the station next door, with a bicycle repair shop and changing facilities for cyclists. Below ground, there will be a bike park for 400 cycles (so Scandy) as well as a multi-storey car park. Meanwhile, above the Resecentrum there will be five floors of offices.

Interested in architecture and want to get a better understanding? Then take a look at the Phaidon Atlas, our peerless architectural resource. You can sign up for a free trial here.