Art Basel Miami Beach may have just finished, yet Florida still has a lot to offer lovers of architecture and art. Herzog & de Meuron's new building for the Pérez Art Museum opened with the Ai Weiwei show, and now Foster + Partners have unveiled their master plan for the city's Norton Museum of Art.

The Norton is a major regional museum, and has 7,000 works of art and photography in its collection, including pieces by Gauguin, Matisse, Miró, Monet, Picasso, Hopper, O'Keeffe, and Pollock.

Sir Norman's plans will see the 72-year-old museum in West Palm Beach double in size, and will also reinstate some of the architectural elements of the original design. "The overall master plan is about rediscovering the roots of the museum," says Foster. "There was an original access that related to the water." 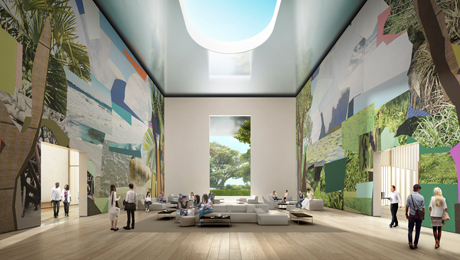 The Norton Museum of Art by Foster + Partners

By putting the entrance back on South Dixie Highway with restored glazed and iron doors onto the courtyard, visitors will be able to reclaim the view onto the Intracoastal Waterway, the stretch of sea that lies between the mainland and Florida's barrier islands.

The 1941 museum building was conceived by architect Marion Sims Wyeth, whose work - mostly mansions of that period - lie all along Palm Beach. An important figure in his day, Sims Wyeth was the first architect in Palm Beach to become a fellow of the American Institute of Architects. Sims Wyeth designed Norton as a series of single-storey Art Deco-inspired pavilions, sitting around a courtyard. Since then, a further wing and a car park have been added.

To this, Fosters + Partners is adding three more double-height pavilions, in the hope of restoring Sims Wyeth's symmetrical scheme and creating a 'museum in a garden'. Inside will be a state-of-the-art auditorium, event space and a 'grand hall', which is described as the social hub of the museum, plus a new museum shop and a new restaurant with seating in the garden. Here's also a shady roof canopy in metal, which juts over the square.

The Norton Museum of Art by Foster + Partners

It looks like another great space from Sir Norman. For more on this, go here. For greater insight into new buildings around the world, take a look at our Architecture Travel Guide app, which features 1,500 projects from 840 practices around the world. Also, if you're off to Miami, don't forget your Wallpaper guide.