At Phaidon we tend to pride ourselves on the pursuit of beauty in just about everything we champion. So you may be surprised to find the pictures above and below here. Bear with us while we explain. Champigny-sur-Marne is a slightly down-at-heel suburb to the south east of Paris. It's grandees decided that the district was in need of a little urban renewal, and they tasked Paris-based Edouard François to devise a housing and retail scheme.

Much of the area is made up of 1970s residential blocks, and François' solution was to allow the existing - some would say aesthetically unappealing - structures to sit pretty. It's an inverse logic which the architect describes thus. "I cannot do beauty, because it will make the rest look ugly, so I decided to do something very ugly, to make the rest look pretty." 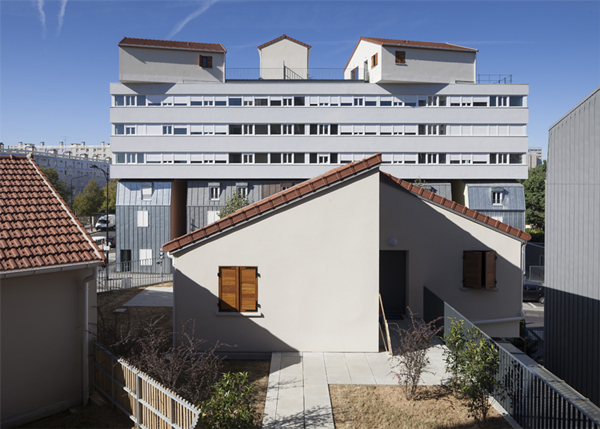 The upshot is a sort of architectural montage, or Urban Collage, as François puts it. Three eras are stacked on top of each other, with a terrace of fairly standard three-storey town houses clad in copper, zinc and tiling at ground level, a 1950s apartment block resting above that, and perched on top at various angles a handful of individual family houses with conventional pitched roofs. The building might look completely uninhabitable, but it actually contains 114 residences as well as shops and parking.

As François says: "Assuming that the city is a complex body, we superimposed elements found on site: townhouses at the base, a housing block from the 1950's in the middle, and on the roof, single family homes. We organised them as archetypes to be read from bottom to top. The complexity of this project lies in the vertical superposition of these structural elements, shifting the three typologies independently."

Is his Urban Collage so bad it's good? Or will its inhabitants come to curse the crazy melange? From a distance, it seems to work. For more post-modern building, consider our Atlas of 21st Century World Architecture, which features over 1,000 of the most outstanding works of architecture built since 2000.