"Floating base is a physical materialisation of the virtual stockmarket," says Rem Koolhaas

According to Rem Koolhaas, OMA's new Shenzhen Stock Exchange is conceived as a physical materialisation of the virtual stock market:

"The essence of the stock market is speculation: it is based on capital, not material. So it is a building with a floating base, representing the stock market – more than physically accommodating it," the architect says.  The building is scheduled for completion next month when it will join the company's biggest project in China, the CCTV HQ in Beijing.

The 250 metre tall building's main talking point, and the thing that's divided opinion so harshly (in the manner of its CCTV HQ, referred to by locals as 'the underpants') is the raised three story podium which locates the trading floor 36 metres above the ground. 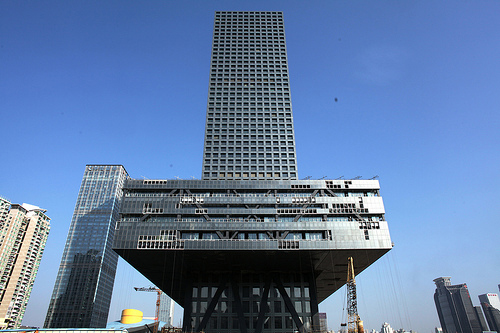 Koolhaas says that typically, the base of a building anchors a structure and connects it emphatically to the ground. "In the case of Shenzhen Stock Exchange," he argues,  "the base, as if lifted by the same speculative euphoria that drives the market, has crept up the tower to become a raised podium, defying an architectural convention that has survived millennia into modernity: a solid building standing on a solid base."

That raised podium contains all the Stock Exchange functions, including the listing hall and all stock exchange departments and it's true that the raised podium vastly increases SZSE's exposure in its elevated position. OMA says that "When glowing at night, it 'broadcasts' the virtual activities of the city's financial market, while its cantilevers crop and frame views of Shenzhen. The raised podium also liberates the ground level and creates a generous public space." 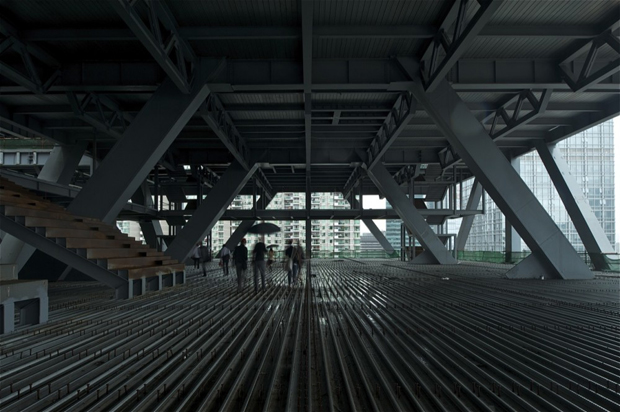 The facade wraps the exoskeletal grid structure supporting the building in a patterned glass, the texture of which reveals the construction technology behind. The neutral colour and translucency of the facade change with weather conditions, creating a mysterious crystalline effect: sparkling during bright sunshine, mute on an overcast day (of which there are plenty thanks to the air pollution in Shenzhen). For more ground breaking projects by OMA check out The Phaidon Atlas of 21st Century Architecture.