MAD have designed a modern-day stone turret as the home of the new Lucas Museum of Narrative Art on Lake Michigan. The building will chart the history of the moving image through the collection of film director George Lucas, best known for the Star Wars trilogies, Raiders of the Lost Ark and American Graffiti.

The Beijing-based architects are best known for their  Absolute Towers in Mississauga, Canada, dubbed the Marilyn Monroe Towers by locals, on account of their curvaceous silhouettes.

There are more rounded edges served up in Chicago, but of a more modest variety. Inspired by Frank Lloyd Wright and Mies van der Rohe, the museum building peaks in a ‘floating’ disc with a 360-degree observation deck. Horizontal slits are cut out of the stone for windows, and the three levels of exhibition space are designed on an ‘infinite loop’.

The design doesn’t have the audacity of many significant cultural structures, which are immediately proclaimed as iconic. MAD’s creation merely “aspires to join the ranks of Chicago’s many cherished landmarks”.

Meanwhile local architects Studio Gang have done a framework plan for Northerly Island, 91 acres of greenery next to the campus, which includes a bridge to the new museum. Studio Gang are also involved in the Lucas Museum as its landscape designers. 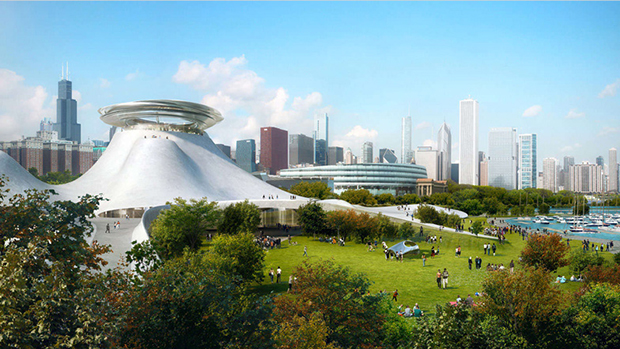 MAD founder Ma Yansong says of the design: “Our museum is not in the city, not in the downtown area. It is on the edge of the artificial and nature. So I was thinking, maybe our architecture can bring the nature force, like water waves.”

Regular raders wil know how keen we are to feature MAD projects on Phaidon.com but you can check out their work in much more detail at their practice page in the Phaidon online Atlas. If you're not yet signed up for that you can take a free trial for a month here.