New York has a housing shortage, or more accurately, an apartment problem. The city's demand for one- and two-people apartments has outstripped supply. So while the city's one- and two-person households have rocketed to 1.8m, Manhattan boasts a mere 1m or so studio and one-bed properties. As New Yorker's doutbless know this is partly caused by the city's building regulations, which stipulate that all new properties - regardless of the number of bedrooms - must be no less than 400 square feet.

However, in a bid to find space for these much-needed dwellings, Mayor Michael Bloomberg has temporarily waived these codes to enable the construction of smaller dwellings.

"The city's housing stock is misaligned with the changing demographics of its population," Bloomberg explains, "The growth rate for one- and two-person households greatly exceeds that of households with three or more people, and addressing that housing challenge requires us to think creatively and beyond our current regulations." 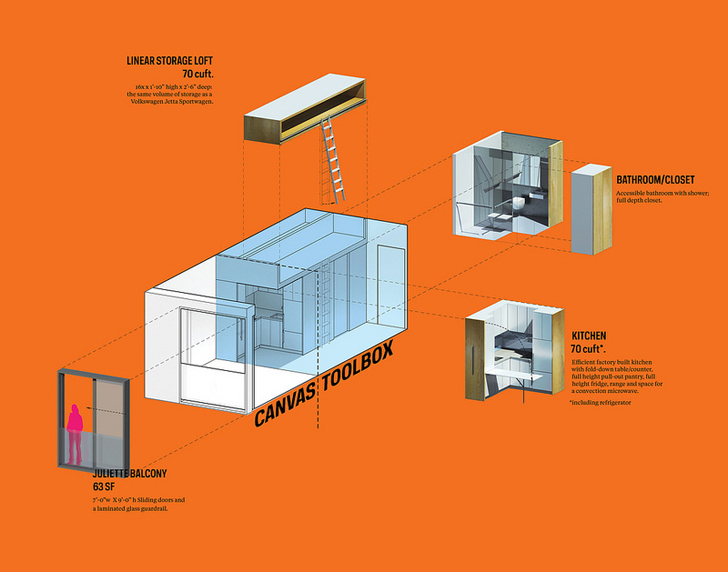 The winner of AdAPT NYC, a city-sponsored competition to design these micro-units (that's bedsits in English) was a collaborative submission put together by Monadnock Development LLC, Actors Fund Housing Development Corporation, and nArchitects, which beat 32 rival entries. Now, the first 'My Micro NY' project is earmarked for a plot in Manhattan's Kip's Bay. 55 of the long narrow units will be stacked nine storeys high. They rather remind us of shipping containers, which is apt, as they'll be constructed prefab-style at Brooklyn Navy Yard and hoisted into position by a crane. 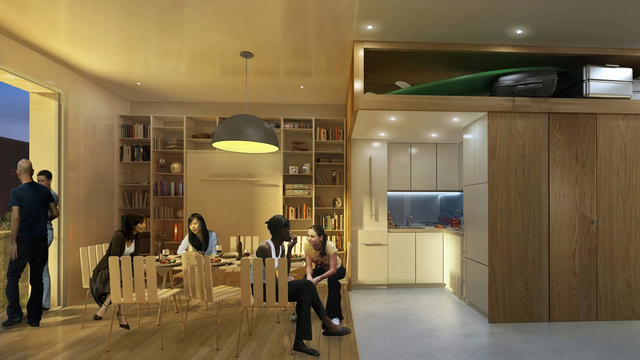 nArchitects - which is headquartered in NYC - liken these units to ships' cabins. Hence the tiny bathroom, teeny kitchen, and slightly less-minute living space, which has a double, wall-mounted bed in the sleeping quarters. Another nifty design feature is the false ceiling above the kitchen and bathroom, which can be used as storage space. Each one also has a Juliette balcony - for ventilation, as much as aesthetics, we imagine - and a floor-to-ceiling window.

Building work on the Kip's Bay pilot will be starting later this year, with completion slated for 2015. Prospective couples should start shedding their clutter now. For more on how we're living and building things today, consider our Atlas of 21st Century World Architecture, which covers 1,000 of the best works of architecture built since 2000.