Just as certain actors are forever linked to one role, some architects never shake off a single triumph. For Daniel Libeskind it’s the Jewish Museum Berlin, which opened 12 years ago.

And now that association has been revived, as he has created a new space for that museum. This building has very different aspirations to the shocking brutality of the first one. For a start, that was a brand new structure, while this is mostly a remodelling of an existing building.

Even though the Jewish Museum was operating out of the 1753 Kollegienhaus as well as Libeskind’s 2011 edifice, it was bursting at the seams. So much so that 70 staff had been relocated to rented offices around the city. At the same time, the museum wanted to make its archive available to the public. So they rehoused it in the old Central Flower Market Hall, a 1960s industrial building with gently curving walls by Bruno Grimmek.

Eventually, the powers that be gifted Grimmek’s Hall to the museum. Libeskind’s brief was to convert 25,000sqft of the building into the Academy of the Jewish Museum Berlin. The Hall’s remaining 40,000sq ft will be reserved for shows and events in the future. 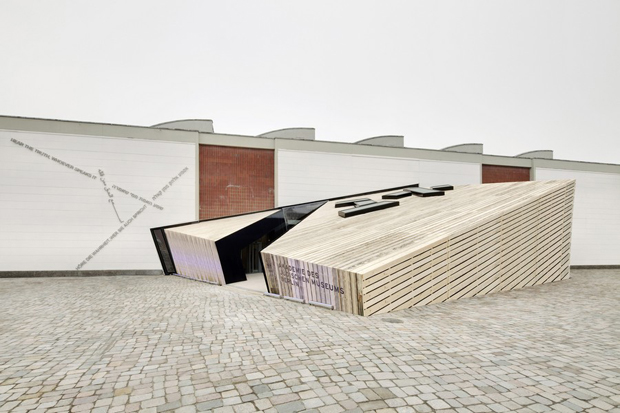 The Academy of the Jewish Museum, Berlin - Daniel Libeskind

Rather than completely reinventing the rooms, Libeskind merely and sensitively introduced low-rise partitions which left Grimmek’s curvaceous ceilings exposed. Two rows of offices and meeting rooms have been positioned along opposite edges of the building, and between these, there are plans to introduce what the museum is calling a Garden of the Diaspora. Designed by Atelier le Balto in Berlin, it will comprise tables of mosses and ferns.

Outside, however, Libeskind’s signature shapes are on view. He’s put in three cubic forms which seem to be half buried in the square’s paving. They function as the entrance, the library and archive, and a multipurpose room.

For Libeskind, this is all a relatively light touch, which can be put down, apparently to that restricting combination of a tight budget coupled with a tight time-frame. But it also seems appropriate that Libeskind shouldn’t have tried to out-Libeskind himself on the site of his greatest success.