What happens when Jenga meets genius

In our age of 'wow' architecture it has become all too easy to take for granted the impressive and often groundbreaking level of skill that facilitates our increasingly adventurous urban landscapes. So, let us a take a moment to appreciate the technical know-how that has enabled Herzog & de Meuron's latest creation in its home town of Basel, Switzerland.

The Pritzker Prize-winning architecture practice behind the Beijing National Stadium, the Walker Art Centre in Minneapolis and the Tate Modern in London has just completed a dramatic business centre for Actelion, a global pharmaceutical company.

The building comprises a series of seemingly separate cantilevered blocks or 'beams' stacked on top of one another which jut outwards into the surrounding space in all directions. The building 'rests' on four cores at the edges while a fifth, central core to the structure houses lifts which connect the floors. Around these are communication areas with the end of each 'beam' reserved for a meeting room. The design duo began working on stacked structures with a (currently unbuilt) film academy in Qingdao, China as well as the Vitrahaus. Jacques Herzog claims the Actelion building is "one of the most complex ones we've ever done." 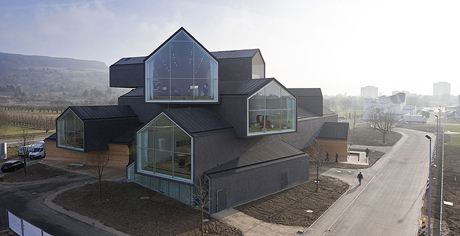 It's been made possible thanks to a recently introduced structural design technology which allows a complex web of interlocking loads to work within a single structure. The striking appearance and cutting edge skill involved in the centre brilliantly promotes the shared ideals of both the company for which it was created and the architects themselves, as always, at the forefront of innovation and experimentation.