"The bridge is not the ‘event’ in the city," say OMA "but a platform that can accommodate all the events of the city.”

We imagine big-name architects must be overjoyed to come across design briefs requesting something 'bold', and even more pleased when such a brief comes from a well-funded city. Vincent Feltesse, president of Urban Community of Bordeaux, made just such a request when inviting practices to design the city's new bridge. Now Rem Koolhaas's practice, OMA, is behind one of two designs under considereration for the proposed Pont Jean-Jacques Bosc.

OMA's design isn't overly showy, but instead “attempts to rethink the civic function and symbolism of a 21st century bridge.” The OMA plan isn't especially complicated either; it is, as the practice puts it simply “a platform 44 metres wide and 545 metres long [which is] stretched beyond the water on either side, creating a seamless connection with the land.” 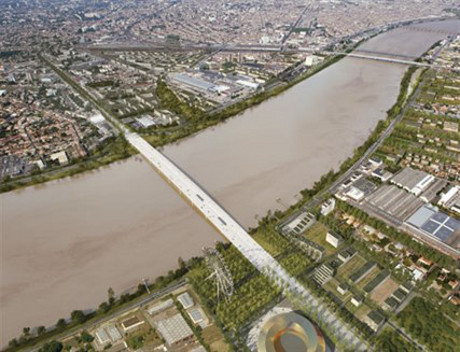 OMA's bridge slopes gently, making room for river traffic while allowing pedestrians to walk across quite easily. There are lanes for cars, buses, trams, bicycles and footpaths. Indeed, OMA makes clear that “by far the largest strip is devoted to pedestrians.” Yet the practice hopes Bordeaux's citizens won't simply cross from one side to another, but will, on occasion, hang about on the new bridge, for city-organised events, concerts, parties and gatherings.

“The bridge itself is not the 'event' in the city, but a platform that can accommodate all the events of the city,” says project leader Clement Blanchet. “We wanted to provide the simplest expression - the least technical, least lyrical - an almost primitive structural solution.” And sometimes the simplest is the best. After all, if you're trying to bring two sides of a city together, why not meet half way?

To find our more, go here, and for more on how we build today, please take a look at our Atlas of 21st Century World Architecture, which, in one single volume, takes in over 1,000 of the most outstanding works built since 2,000.