New York is set to receive a new addition to its skyline thanks to Moroccan-born, Paris-based architect and urban planner Christian de Portzamparc. The 90-storey One 57 skyscraper will be located on 157 West 57th Street, just off Central Park, in Midtown Manhattan and is due for completion by 2013.

At 1000 ft high, _One 57 _will be the tallest residential building in the city. It will house a 210-room Park Hyatt hotel at its base before progressing into 95 condos, starting from the structure’s 39th floor. “It’s not only stuck to the city, it’s an object in the sky” says de Portzamparc. 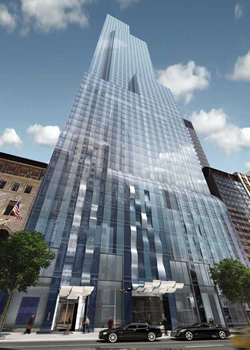 De Portzamparc was awarded the Pritzker Architecture Prize in 1994 and is no stranger to New York, having created the LVMH Tower in 1999, situated at 19 East 57th Street, just down the road from where One 57 will be. One 57 “does more than stand out," the architect says. It naturally belongs. It is not an absolute or final statement; it is an ongoing dialogue. This is what gives landmarks their relevance and meaning.” 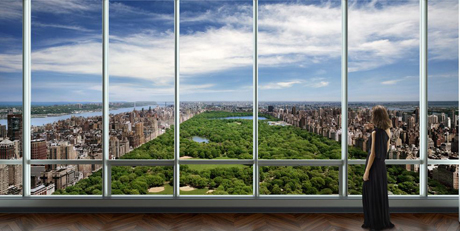 With its cascading glass façade, _One 57 _is sure to be an eye-catching addition to the host of skyscrapers already gracing the area. Despite the economic climate and their $6000 per square foot price-tag, potential buyers quickly cottoned on to their desirability and 30% of the residences sold in the first three months.

Portzamparc says his work focuses on research over speculation and concerns the quality of life. He says aesthetics are conditioned by ethics and maintains that we have too often dissociated one from the other.