Focus on these futuristic façades

As we approach the end of the week it's time again to check in what our colleagues at the Phaidon Atlas have been working on recently. The subject of their popular editors’ focus series this week is buildings with digitally fabricated skins.

Digital fabrication makes use of new technology to efficiently build structures: utilizing computer modeling to reduce materials, pin point excess loads and create responsive features. Processes are streamlined even in the manufacturing stage by using file to factory methods to customize building elements. These techniques result in unique façade compositions: rhythmic, repetitive patterns that are both cohesive and precise while allowing for natural variation. The end result - certainly in the case of the Noord-Holland Pavilion - can resemble some form of alien-like creation. Here’s our pick of the ones they’ve selected for special attention. You’ll find plenty more though at the Atlas here.

__Soumaya Museum__ __ by Free (pic above)__ Museum buildings tend to be conceived either for maximum functionality – acting as neutral containers for art – or as iconic structures that represent a city at a particular historic moment. The Museo Soumaya was designed as both: a sculptural building that is unique and contemporary, yet one able to house a collection of international paintings, sculptures, and decorative objects dating from the fourteenth century to the present. The exterior of the building is an amorphous shape perceived differently from every angle, reflecting the diversity of the collection inside. The building's distinctive façade is made of hexagonal aluminum modules facilitation its preservation and durability. The shell is constructed with steel columns of different diameters, each with its own geometry and shape, creating non-linear circulation paths for the visitor. 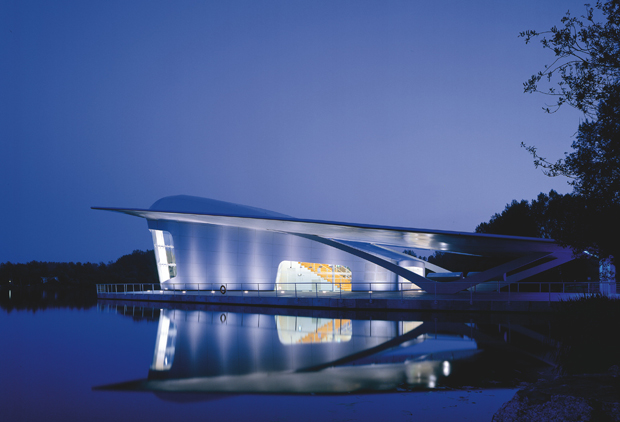 Hydra Pier Exhibition Centre by Asymptote Architecture Asymptote won an international competition for the main viewing pavilion of the Floriade World Horticultural Exhibition in 2002. The brief was to create a permanent work of architecture for the fast-growing town of Haarlemmermeer which is set within an artificial lake created 150 years ago as a polder carved out of the sea. The concept of reclaiming part of the land prompted the architects to push the technological parameters of the envelope and structure, which allowed them to produce a digitally-inspired ‘architecture of the future’. The unique relationship the Dutch have with water is acknowledged in the continually streaming surface of water that shrouds the building, flowing into pools that are supported by a large laminated glass bubble. Inside, visitors see the cascading water as though they are looking out through the cockpit of a vast aeroplane. 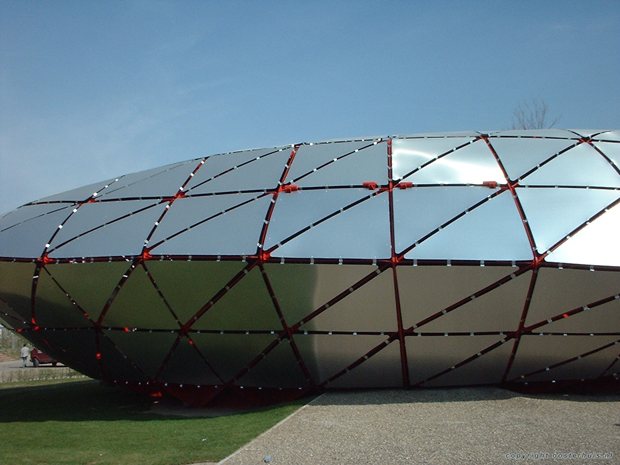 Noord-Holland Pavilion by ONL (Oosterhuis_Lenard)_ This spaceship-like pavilion encloses a multimedia presentation promoting the province of North Holland. The building has a soft, irregular, rounded shape bulging in and out like a flat pebble, but with futuristic metallic triangular cladding panels and a red steel grid visible behind giving it a rather menacing alien quality. Kas Oosterhuis’s architecture exploits new digital technology. The radical amoebic shape was virtually ‘sculpted’ and the triangulated structural grid calculated by computer. Unlike conventional steel buildings, which use repetitive standardized components, every structural element in the pavilion is unique. Each steel component was individually sized by the architect’s computer, which was linked directly with the steel manufacturer’s programmable cutting machines. The same principle was applied to the triangular cladding panels, made in a new composite aluminium material called ‘hylite’, and so the pavilion could be built without any need for conventional two-dimensional specification drawings. Visitors enter through winged doors which emerge from the metallic skin and rise up operated by hydraulic cylinders. 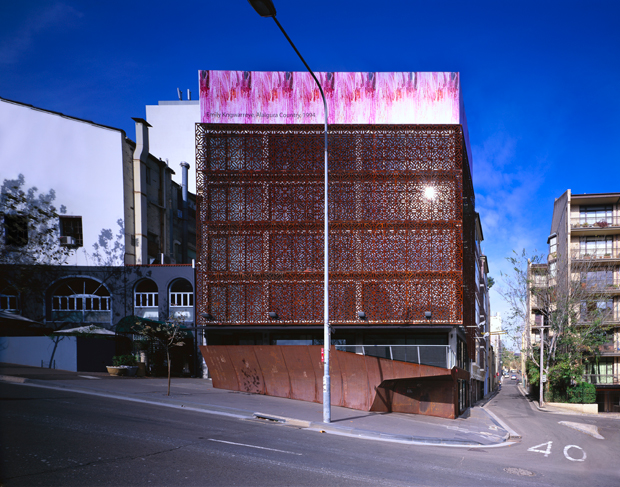 __The Art Wall Office Building by__ __Dale Jones-Evans Architecture__ The Art Wall is a six-storey boutique office, restaurant and retail development in Sydney’s inner city. Located on a compact corner lot on the fringe of Kings Cross and Darlinghurst, the difficult site nestles between two low-rise buildings and slopes steeply with a difference in gradient of one storey. A parallelogram-shaped plan with two façades traces this slope longitudinally. The building reactivates this city corner and showcases public art in an area known for its tawdriness. A solid sculptural base clad in Cor-Ten rusted steel anchors the building into the slope. The building is crowned with a backlit, digitally printed box, curated as changing public artwork. The structure, with a simple off-form concrete frame, is clad in conventional floor to ceiling glazing. The dramatic screen that wraps it provides sun shading, as the façades are oriented north and west. The screen controls views of the city for its occupants and denies visual access to passers-by. 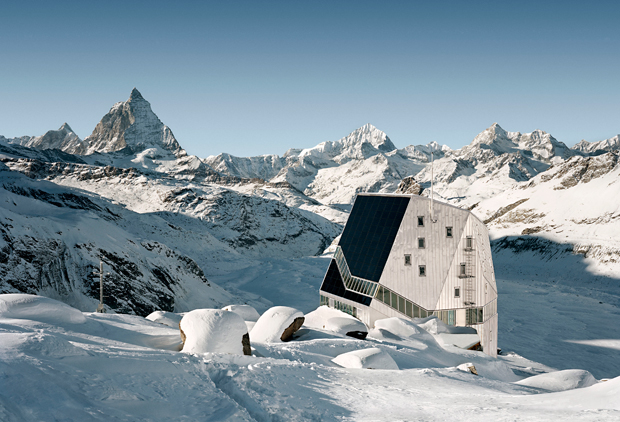 New Mount Rose Hut Hotel by Bearth & Deplazes Architekten This mountain lodge is perched on a Swiss Alpine ridge with views of the Matterhorn. It replaces the previous hut built in 1895. Inaccessible by road, helicopters were used to deliver 220 tons of construction material. The lodge houses 120 bunk beds, dining facilities, and sustainable systems such as bacterial filtering and reuse of waste water.The hut is a wooden structure on a concrete base. It is clad in aluminium, except for the south-facing side which presents a pitched square of photovoltaic cells and solar-thermal collectors to meet 90 per cent of energy needs. To a large degree, form follows function, as exemplified by the efficient packing of sleeping and dining facilities, and the energy-harvesting façade. However the building is also sensitive to its surroundings. Its form references mineral crystals and its irregular peak references the mountains. The reflective aluminium skin renders it almost invisible except at close quarters, where it has a rugged, contemporary elegance. You'll find a whole world of architectural wonder in the Phaidon Atlas. Sign up here for a free trial.