As the Frankfurt Book Fair opens this week work has already begun in Calgary, Alberta, to construct a home for 600,000 books directly above a transport hub. The New Central Library by Norwegian starchitects Snøhetta will sit at the intersection of Downtown Calgary and the cultural hotspot that is East Village.

Trains on the light rail track will chug along tracks that appear out of the base of the slim, curved structure, with the library ‘lifted’ above the public transport below. A covered plaza has been created by cutting away the ground levels of the building, as if slicing through the corner of a pat of butter. 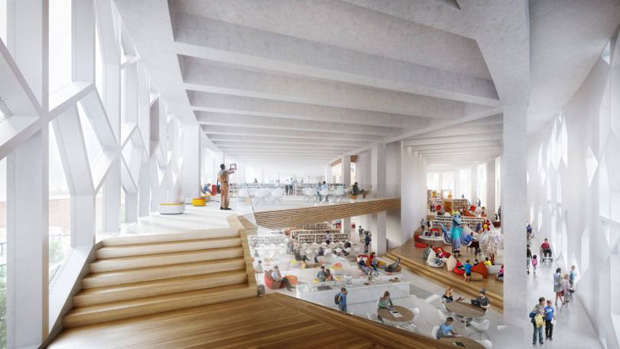 The curved wall and ceiling that the slicing creates will have wood panelling, in contrast to the geometric shapes of clear and fritted glass of the upper façade, which allow some daylight in.

“The entry, framed by the wood-clad arches that reference the ‘ chinook’ arch cloud formations common to Alberta (low dense cloud formations of warm air) becomes a gateway to neighbouring communities and provides a new outdoor civic spaces within the city,” says the team.

The vast main floor will have a sky-lit atrium, where more curved timber of the floors above is on view. The new building, which should be ready to accept visitors in 2018, is an attempt to accommodate the city’s fast-growing number of inhabitants – now up to 1.2m - along with its 45,000-strong student population and the 120,000 workers who commute in. 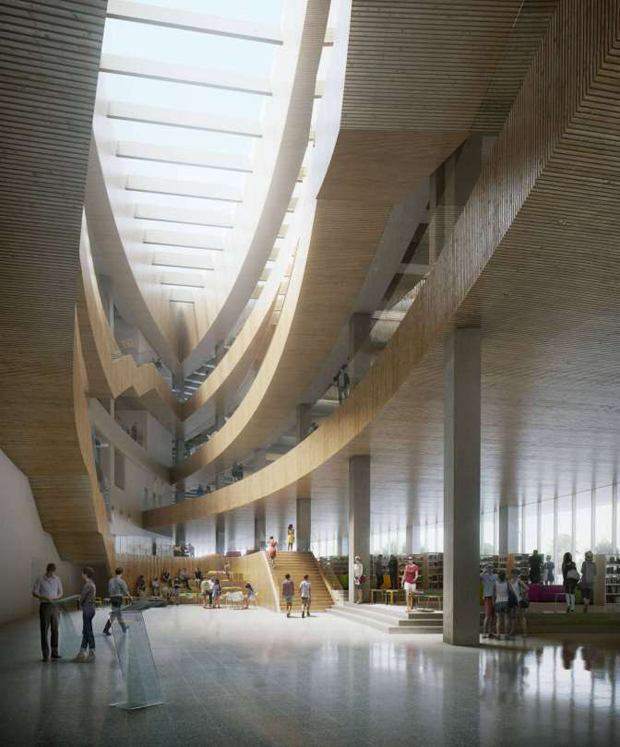 It will replace the existing downtown library – a building that went up in the mid-1960s and was augmented a decade later - with 240,000-sq-ft of usable library space, that’s 66% more room than previously. It will complement another international arrival, that of Foster & Partners’ Bow building last year – the tallest tower in Canada outside of Toronto.

Snøhetta are, of course, no strangers to regular Phaidon.com readers. But it's worth checking out their practice page in our online Atlas for new insight and some amazing floor plans of their buildings including another library in Alexandria, Egypt. You can sign up for a free Atlas trial here.