The most experimental buildings in the Phaidon Atlas

The latest Phaidon Atlas focus is on buildings that push the limits of inspiration, technology and technique

Fancy living inside a giant rock or a building held up by a bucket of stones? Of course you don't but if we were to say these homes were envisioned and created by the most cutting edge architectural practices working today you may find your attitude abating somewhat (along with the fear that the ceiling might fall on your head if you open the door too sharply). This week the always exemplary Editors' Focus on the Phaidon online Atlas is seven buildings constructed using experimental techniques. While it's true that globalised manufacturing and workflows have pursued standardisation across the architectural sector, there is thankfully a small category of architects who've strayed outside these norms, borrowing and adapting production methods from as faraway fields as shipbuilding, basket-weaving and industrial design prototyping.

Here’s our pick of the practices and projects the Atlas editors have selected for special attention this week. You’ll find plenty more though at the Atlas here. And if you want to see all of the Editors' Focus stories, plus a lot more, sign up for a free trial here. And if you've already signed up you'll find the whole article here.

Truffle House, Laxe A Coruna, Spain, Ensamble Studio (Main photo above) Perched on the north western coast of Laxe in Spain is an unlikely holiday home shaped like a rock. Its rough concrete exterior has been hollowed out and contains only the bare living necessities: a bed, sink, shower and tiny kitchenette. The residence is constructed in a process that firstly involves digging a hole in the earth and filling it with hay. Concrete is then poured between the hay and ground. Finally, the internal cavity is formed after a calf has consumed the hay. This space, like the exterior, is left rugged and refers to the topology of the rocky landscape. Heavily insulated by the thick bare stone, the inside is kept cool during the day and warm at night. Overlooking the sea, the inhabitant is isolated from neighboring buildings in a calm and open terrain. A single door and window, with jagged stone along their frames, is all that is needed in this simple retreat. 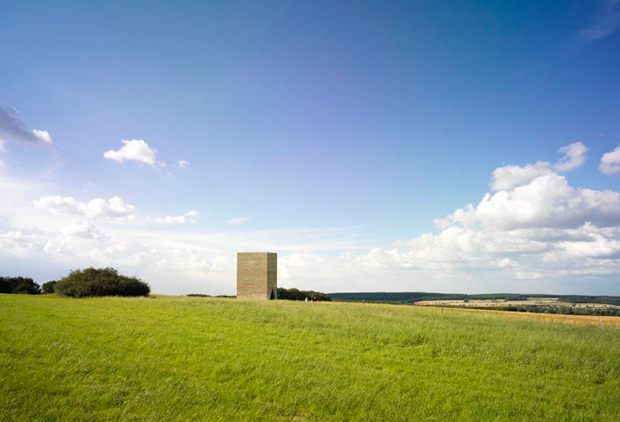 Brother Claus Chapel,Mechernich, Germany, Peter Zumthor This simple concrete chapel stands in a field 48.3 km southwest of Köln, in a vine-growing district. The architect agreed to design the project at nominal cost and help with its construction when he heard that the clients, a Roman Catholic farming couple, wished to dedicate it to Nikolaus of Flüe (Brother Claus), a fifteenth-century mystic and cave-dwelling hermit. The exterior is a smooth chamfered rectangle, rising to 12 m. The clients and their family and friends cast it using local sand and gravel in 24 shifts to represent the hours of the day. A triangular steel door opens into a blackened, soft-edged space, with textured walls that slope in towards a tear-shaped, unglazed hole in the roof. This is the only source of light apart from tiny holes in the walls where the shuttering ties were removed and replaced with translucent glass. The floor is a smooth surface of cast lead. Rain collects in a sunken basin and when this overflows, it drains out through a simple channel cut in the floor. This extraordinary and unexpected interior recalls Brother Claus’s cell and was created using a wigwam of 120 slender tree trunks as a core. When the concrete had hardened, the tree trunks were set alight and the rough, soot-blackened surface is the result. 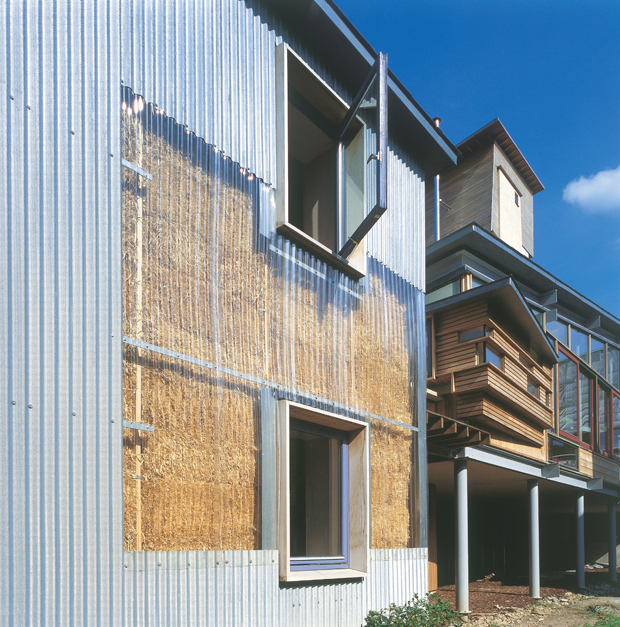 Straw Bale House and Quilted Office, London, UK, Sarah Wigglesworth Architects At the end of a row of Victorian railway cottages, in a north London street that has been described as a place where cars come to die, Sarah Wigglesworth and Jeremy Till have created their own unique and experimental new home and studio. L-shaped in plan, the new building comprises two wings: the office wing that sits as a solid buffer above the adjacent railway lines, and the perpendicular dwelling wing that returns to enclose a more secluded garden and shared entrance courtyard. At the junction of the two wings a hybrid conference and dining room is notionally pinned to the site by a five-storey tower, which not only subverts the distinction between the functions of life and work, but which also creates a domestic landmark at the end of the street. The building has many experimental details, including spring-loaded gabion piloti (baskets of stones) that reduce low frequency vibrations from passing trains, the use of polycarbonate and straw bale construction, and, most conspicuously, the distinctive sandbag facade that provides excellent sound insulation along the railway line boundary. As a long, and at times painful, design and construction process that was even the focus of a television programme, this project demonstrates personal architectural experimentation at its most extreme, and has produced a building that the architects have stated will remain permanently incomplete. 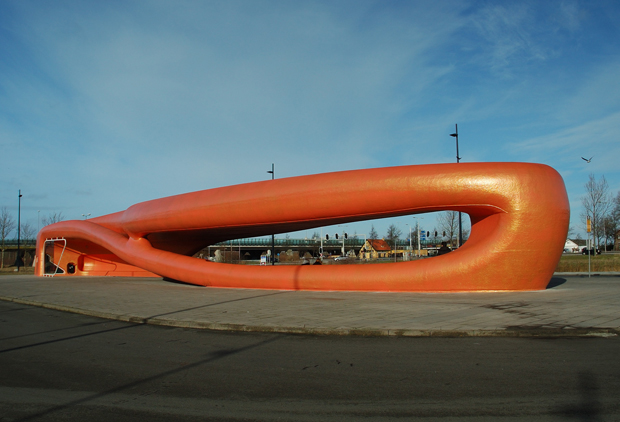 Fluid Vehicle Bus Station, Haarlemmermeer, Netherlands, NIO Architects At the beginning of the year 2003 a bus station was built on the forecourt of Hoofddorp’s Spaarne Hospital. This facilities block is located in the middle of a square and is a public area in the form of an island that serves as a junction for the local bus service. The design of this kind of building is generally neutral, but here the aim was to create a strong, individual image that was less austere and generic. Hence, the building was designed in the tradition of Oscar Niemeyer as a cross between white modernism and black Baroque. The building is completely made of polystyrene foam and polyester and is, as such, the world’s largest structure in synthetic materials (50m x 10m x 5m). The available budget meant that it could never have been created using conventional construction methods. People often wonder about the building’s shape and what it represents, and there are a number of possible answers. A correct answer in architectural terms is that it can be viewed as a large boulder that has been worn away by footsteps and sight lines. A correct answer in philosophical terms is that it can be regarded as a form that has not been pored over but which simply allowed itself to be discovered. A correct answer in terms of the designing process is that it can also be explained as a product of this process, which in this case was somewhat intuitive because of the unfamiliar technical terrain in which everyone had to operate.