Fulton Street Transit Center in lower Manhattan is one of New York City’s busiest underground transit interchanges but, if they can find a precious few seconds to look up, from next year its 275,000 commuters a day will be able to see the light thanks to an impressively sculptural natural lighting device. It’s the design of UK-based Grimshaw Architects, with Arup responsible for the engineering and artist James Carpenter working up the sculptural element.

Arup explains Fulton Street’s complexities, many of which are historical. “New York City’s subways were built privately in the early 20th century and easy transfer between them was not a goal of the system. Later, when the city took over their operation, underground station connections were created, in some cases via confusing routes that created pedestrian bottlenecks and train delays.” 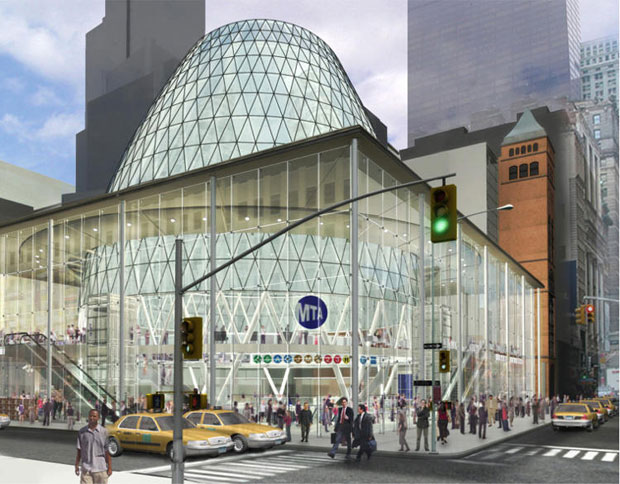 At Fulton Street, no fewer than nine lines converge, hence the need for a new $888m centre. Come 2014, travellers will have easy access and transfers between 12 subway lines and six stations, courtesy of a 350-ft underground concourse.

That’s all well and good, and most excellent for any regular users – so to speak – but the hub’s real talking point is going to be its glass and steel domed atrium over the main complex. This is where Carpenter came in. He helped create the glass oculus that tops the atrium, which is defined by a cable net, stretched within a cone. “This cable net supports an inner skin of filigree metal reflector panels, optimised to capture and distribute year-round daylight to the deepest levels of the transit centre,” explains Grimshaw. 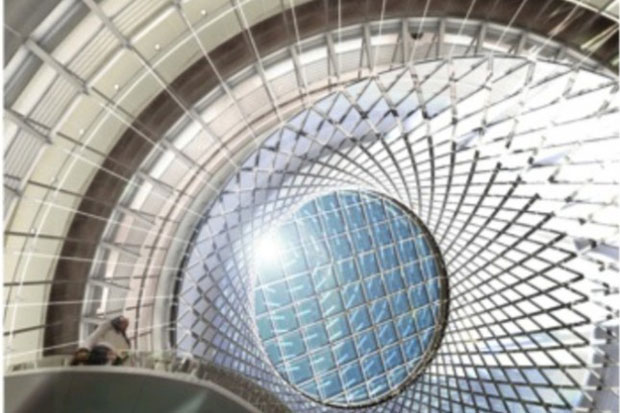 Getting natural light into New York’s subterranean stations was popular in the early days, according to Arup. “The architecture emphasised a connection to the sky, often through skylights planted in the median of city avenues above - lenses in the concrete sidewalks.” However, these were so difficult to keep clean that it wasn’t long before the light source was completely blocked. From then on, electric lighting came to be relied on. This had its good and bad points, according to the engineers. “While this allowed for greater flexibility in station design, permitting construction at any location and depth, it also created a sense of disorientation and alienation for some passengers.”

With this vast and awe-inspiring dome, disorientation is one condition Fulton Street visitors are unlikely to suffer from. Whether anything is enough to draw the multi-tasking commuter away from the addictive glow of a smartphone is another matter, however. You can see more of the most important transport-related architecture of our age in two of Phaidon's best selling architecture books: The Phaidon Atlas of 21st Century Architecture and 20th Century World Architecture.