One of our favourite architects at the moment is the German practice, J. Mayer. H, and we’ve noticed a neat symmetry - or to be more precise – asymmetry, to some of the projects they’ve been coming up with lately.

At the tail end of 2010 they completed a blob like airport terminal in the Georgian city of Mestia and last year they contacted us with their winning plans for an urban planning concept in Düsseldorf’s Quartier M. We particularly liked the way the planned high-rise seems to grow like a sculpture from one of the peripheral developments and the use of asymmetric windows and patterns on the facades. You can see a picture of it below. 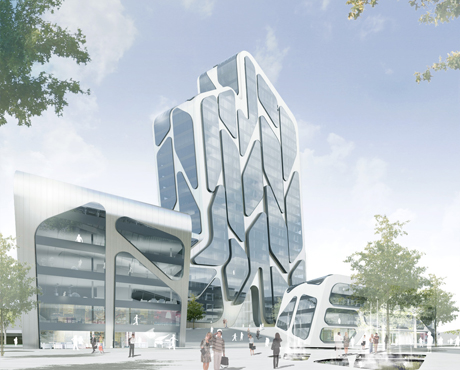 This morning they sent us some pictures of a police station (top) and justice house (below) they’ve just completed – again in Mestia and once again, we see a familiar pattern emerging as well as a particularly good combination of the old and new. 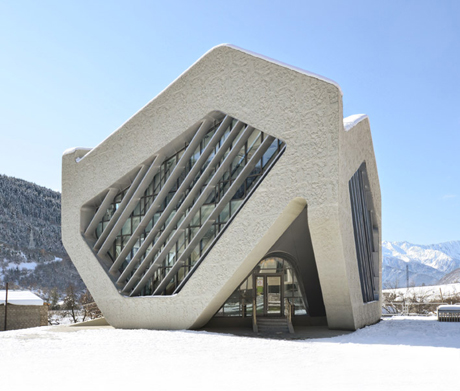 The project is situated in the heart of the old town of Mestia, next to the newly-built city hall. Its shape pays homage to the medieval stone towers, which are traditional to the town’s mountainside region. The façade comprises prefabricated textured concrete and large openings which offer a maximum of transparency. The House of Justice serves as a two storey civic centre for the people of Mestia, a village with a strong cultural heritage. The concrete structure frames the spectacular landscape of the Caucasian Mountains. The building is part of an ensemble of new public buildings around the main central public plaza.

You'll find more examples of innovative, cutting edge architecture in the Phaidon Atlas of 21st Century World Architecture. And for another look at an architect who sees things in a different way to most others check out John Pawson's wonderful A Visual Inventory.