Sou Fujimoto tells us about the bus stop he built

What happened when the Serpentine Pavilion architect went to the tiny Austrian village of Krumbach?

When we launched the Phaidon Atlas at the Venice Architecture Biennale a couple of weeks back we took a moment or two to catch up with some of our favourite architects, educators, curators and designers. One of these was the brilliant young architect Sou Fujimoto, described as a "visionary" by no less an authority than Hans Ulrich Obrist himself. We at Phaidon.com tend to agree.

Fujimoto, as anyone lucky enough to visit last year's Serpentine Pavilion in London will know, creates new forms of environments where the natural and the man made merge - not solely architectural nor solely natural, but a unique meeting of the two.

Often inspired by organic environments, his buildings inhabit a space between nature and artificiality and are always designed with human behavioral patterns in mind. His most recent complete project was, of all things, a bus stop in the small village of Krumbach in the Bregenzerwald area of Austria. 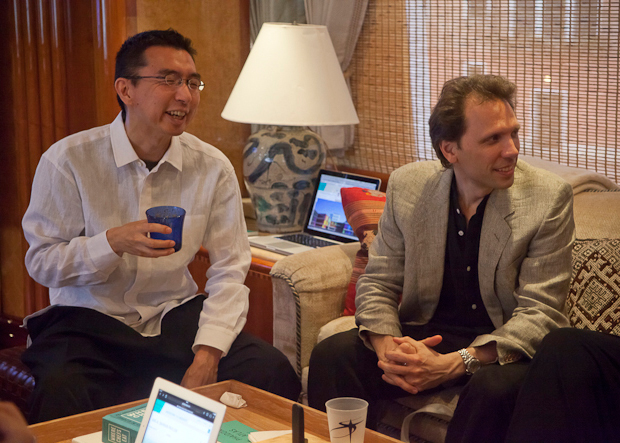 Sou Fujimoto checks out the Online Atlas at its launch in Venice. Matteo Cainer is to his left

"It was a really exciting project," Fujimoto told us at the Phaidon Atlas launch. "The mayor of the town is really interested in architecture and uses it to bring the village together. They sent me an email saying they would like to have a bus stop and that they were choosing seven architects to create seven different stops.

"I saw the list and it was so amazing - including many architects from my generation who I respected - so I really wanted to be part of it." The list included Wang Shu, RintalaEggertsson Architects, and Smiljan Radic. In lieu of a fee, each architect was offered a holiday in the area.

"It’s really an amazing project and really quite challenging because of course it’s part of a public transportation system but at the same time it’s quite a small and really intimate space," Fujimoto told us. "Also it was interesting to try to understand such a small and personal space but one on such a very public scale. 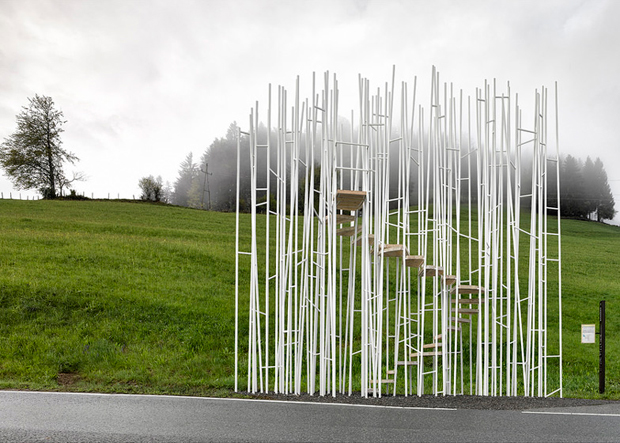 "It’s a really amazing village with a beautiful landscape. It’s a small village but the architecture there plays an active role. They have a mix of generations living there and everybody seems to like having new and active things like this going on. It felt very collaborative."

Fujimoto is currently working on a housing tower in Montpelier (you can read about that left). "We just won the competition," he said. "It has many balconies! It's based on the local climate and the local lifestyle. We've also just won a competition to build a 300 metre tower in Taiwan. It's our biggest project, a little like our Eiffel Tower except we're trying to design an 'anti-tower', tower or a kind of 'opposite' tower." 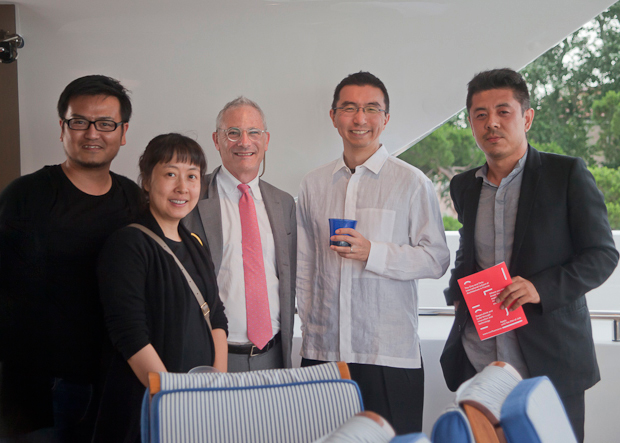 Of course, a big project like this is a big challenge and forces you to think differently about things but many times we also get inspiration from small projects and that often feeds into the bigger ones. Because, really, everything is architecture and it relates to human behaviour. This fundamental point is common through our work in such different scales." Check out Sou Fujimoto's Practice Page in the Atlas and sign up for a free trial here.