In 2003, Coop Himmelb(l)au won a competition to design a concert hall in the Danish city of Aalborg. Called The House of Music it was part of a master plan for the so-called Cultural Plaza, also by Wolf D. Prix’s international firm. The aim was to transform this entire site on the banks of the fjord into a destination for art, music and education.

As such, The House of Music is neighbours with Nordkraft, which houses cultural and leisure activities in a former power station.

The final scheme was approved by the client, the North Jutland House of Music Foundation, six years later, and now the building will be ready for visitors, audiences and musicians later this year. 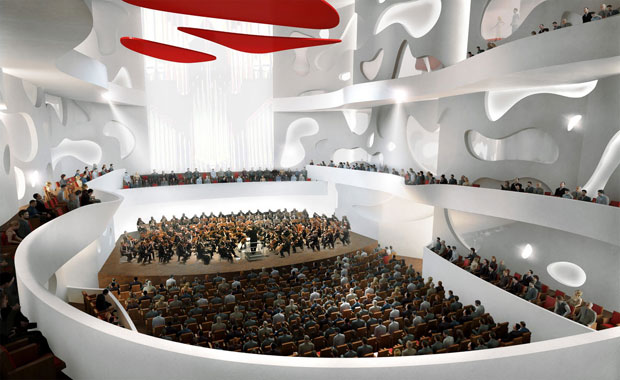 In this final phase of construction, the wow-factor elements are the variously-sized circular windows cut out of the elevated block, some of them framed by amoebic shapes.

The real pull, apart from Coop Himmelb(l)au’s landmark architecture, will be the 1,300-seat concert hall, while other smaller auditoria and rooms in the U-shaped structure will be used for music lessons and music practice. 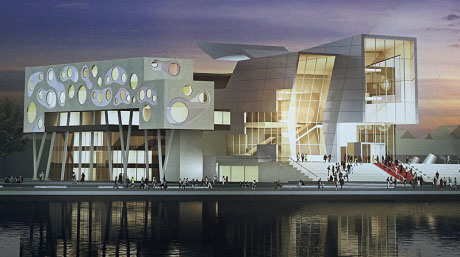 “The House of Music is organized around the concept of sharing and synergy, while recognizing the need for independence of the individual institutions within,” say the architects. “Wherever possible sharing of spaces is enabled and overlapping of use of public and performance spaces is supported through the design.”

While undoubtedly Danes and non-Danes will flock to this stand-out building from the Austria-based architects, the arts organisations and practitioners within are also getting something special. For this will be the home of the Aalborg Symphony Orchestra, the Academy of Music and Aalborg University’s Department of Architecture and Design, making it one of the world’s most exciting places of education on the planet.

For further insight into architectural developments across the world, download the Phaidon Architecture Travel Guide App and for more on Coop Himmelb(l)au check out The Phaidon Atlas of 21st Century World Architecture in our online store.