Architect reimagines the idea of a tower for a design school in Hong Kong, the city where her career began

Her first big project may have never been built, yet 30 years later Zaha Hadid's most recently completed creation reaffirms her affection for Hong Kong. The "topping-out" or completion ceremony for the Hadid-designed Jockey Club Innovation Tower took place last week. This multipurpose building lies at the heart of Hong Kong Polytechnic University's School of Design, and houses a lecture hall, classrooms, studios, workshops, a museum, an exhibition space and a communal viewing lounge. Hadid says her studio "re-examined the traditional characteristics of a tower and podium to create a seamless fluid structure."

Hong Kong holds a special place in Hadid's heart. Back in 1983 she designed The Peak spa in Hong Kong - a notable early project which was never built. Commenting on the Innovation Tower's completion, she said "It's a very important project for us, particularly because it's in Hong Kong, the city where my career started. I have always had tremendous affection for it.'" Let's hope The Tower launches many more creative careers as auspicious as Hadid's. 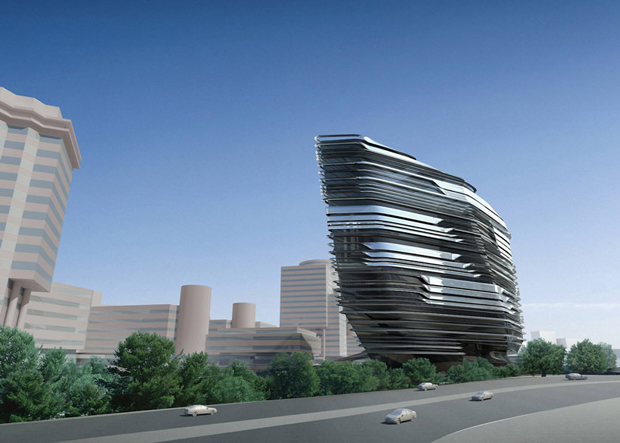