Where will Obama read his Phaidon books?

Snøhetta, Allied Works and Mos Architects battle it out for presidential library seal of approval in Hawaii

In 2013, the George W Bush Presidential Library and Museum completed on the campus of Southern Methodist University (SMU) in Dallas, Texas. Designed by Robert AM Stern, dean of the architecture school at Yale University, it’s a grandiose brick and limestone building, in keeping with the university’s American Georgian character.

If Hawaii has its way, the Barack Obama Presidential Library will be a more contemporary affair. The University of Hawaii is vying with the Universities of Chicago and Columbia in New York to be the location of this latest presidential library.

To this end, it has commissioned designs from international firms including Snøhetta and Allied Works for a beach site near the Kaka'ako Waterfront Park in Honolulu. President Obama is expected to select a location in March. 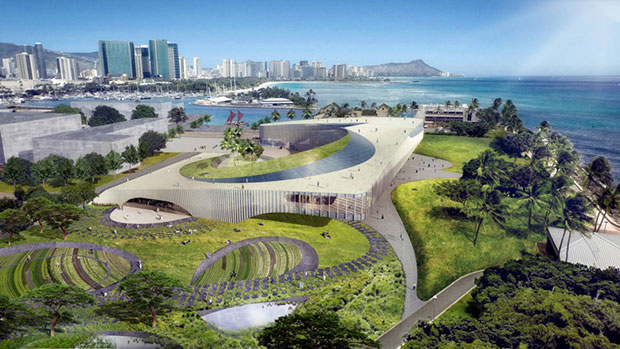 All three concepts draw inspiration from the island’s topography and culture. Scandinavian firm Snøhetta joined forces with WCIT Architecture in Honolulu to propose a square structure with a rounded open courtyard within.

Meanwhile, Allied Works, which is based in New York and Portland, has suggested a collection of glazed pavilions linked by a roof that twists. And New York practice Mos with Hawaiians Workshop-Hi have designed a green roof linking together a number of small environments.

The Obama Foundation’s estimated $500m structure will be America’s 14th presidential library. The first of these represents of the 31st President of the United States, Herbert Hoover. “These are not traditional libraries,” explains the Office of Presidential Libraries, “but rather repositories for preserving and making accessible the papers, records, and other historical materials of US Presidents. Presidential Libraries and Museums are great treasures of our nation’s history.”

Check out Snøhetta' practice page in The Phaidon Atlas. And you can see even more works by Allied Works on their practice page. Not a member yet? No problem, you can sign up for a free trial here. Meanwhile, check out all our great photography books in the store here.