As the art world waits with excited anticipation to get a look at the all-new Museum of Contemporary Art in Sydney which opens in a few weeks after an AUS$53 million, 18-month renovation, we caught up with the man behind it all, Sam Marshall, of Architect Marshall to find out a bit more about the project.

"It had to be a unique building," Marshall told Phaidon, "one that took its prompts from the existing building and the immediate area, and be welcoming, yet strong enough to proudly stand up in an area of such large scale buildings." Standing on the banks of the city's iconic harbour, Marshall's striking design with its dramatic new facade of black, white and brown interlocking geometric blocks, is sure to hold its own in an environment already lined with impressive and prominent feats of architecture and engineering.

The National Centre for Creative Learning is one of the highlights of the upgrade, featuring a multimedia room and digital classroom, two practical studios, and a 120-seat lecture hall. New venue spaces have been added on top of the museum's existing building as well as a rooftop cafe and sculpture terrace which take advantage of spectacular views over Sydney Harbour to the Opera House.

"We have done many galleries, both private and public, but not as extensive nor in such a prominent position as this," Marshall continued. "Working on such a cultural building right in the middle of Sydney, especially on the Harbour opposite the Sydney Opera House, is certainly an honour. This is what we like doing."

The word 'renovation' barely seems substantial enough to describe the level of change the museum has been undergoing. As well as the new exterior, the interior of the building has been rejuvenated and will house three new galleries, increasing the gallery's overall size by 48,000 square feet - just over fifty percent.

"I am most proud of how coherently the underlying strategy has been implemented. The strong geometry of the existing building along with the seamless white cube as gallery were the starting points for the arrangement of spaces" says Marshall. 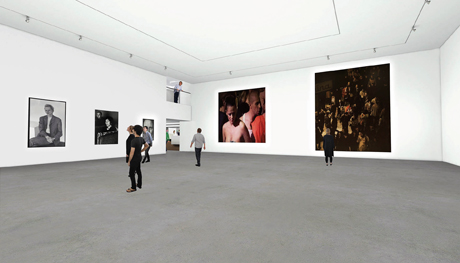 Marshall explains how he took the city of Sydney itself as inspiration - "These [gallery spaces] were articulated in the pattern of the city whereby rooms are buildings and the spaces between are public spaces offering views in, out and through. This was applied to the overall facade, arrangement of rooms and right down to joinery and detailing."

Previous attempts to refurbish the MCA had floundered. Marshall says the gallery's "very committed director" Elizabeth Ann Macgregor helped push it through this time. "She saw that there was very strong public support for contemporary art reflected in steeply rising attendances," he said. The project was possible thanks to "private individuals who were prepared to donate to the building fund to prompt matching government funds" Marshall added.

And Sydney-born Marshall shares the city's enthusiasm for contemporary art - "Having the highest respect for artists, I was humbled to be asked to create spaces for the display of their art. Contemporary art never fails to amaze and inspire me." 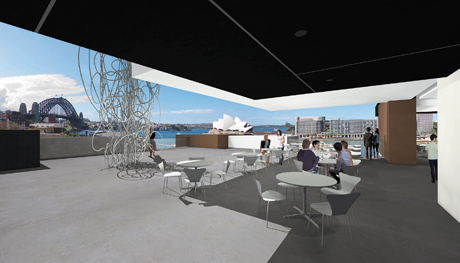 To celebrate the opening of the new space the museum has commisioned four brand new art-works by some of the country's leading contemporary artists. Emily Floyd is creating an intriguing-sounding 'sensory enviornment' and Grant Stevens will create a video for the foyer. Australian representative at the 2011 Venice Biennale - Hany Armanious - will be the first artist to exhibit in the new sculpture terrace, and Brook Andrew is in the processes of creating his work which will appear on the building's facade. Read more about Brook Andrew's work for the Museum of Contemporary Art. Check back for an interview with Elizabeth Ann Macgregor as we continue Phaidon's Focus on Australia throughout February.