Architects and designers will happily pull out all the creative stops when it comes to kids. Think of Enter Architecture’s centre of autistic children in Sydney, with its soft angles and bright orange paint job. French practice Hondelatte Laporte Architectes has taken the infantile theme one step further at its new nursery and childcare centre in a south western suburb of Paris.

The three-storey building, with its white corrugated iron exterior and cantilevered  upper floor looks pretty standard - pretty standard that is until one spots the giant yellow giraffe forcing its way through the structure. Its legs are planted on the ground under the cantilever, while its neck and head poke out of the roof. “The idea is to animate the urban landscape by using a child's imagination,” claim the architects. 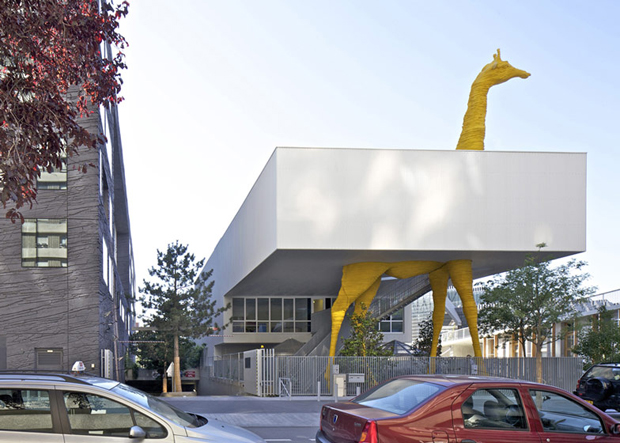 The centre is called the Giraffe Childcare Centre, which is where things start to make a little more sense. Inside is a 60-bed childcare facility and a nursery, along with a playground on each of the three floors.

But the giraffe is not alone. There’s also a polar bear and a swarm of vast ladybirds, all of which are made of concrete. “Through their affable form, the lively animal sculptures invite us to live our dreams,” say the architects.