“I think the term 'Minimalist' is been used so often that it's meaning has become a bit diffused. I tried to make a subtle insertion on the existing landscape, and on the other hand to create very different spaces within the house. But I wouldn't know how to put a specific label to it.”

Like many in his profession, Mozambique-born, Porto-based architect and designer Rui Grazina is rather self-effacing when it comes to describing his latest work. It’s an extremely discrete (and decidely photogenic) family house situated in the northwestern Portuguese city of Barcelos. The family house boasts two storeys on the eastern side, and just one on the western side due to the steep topography of the site. 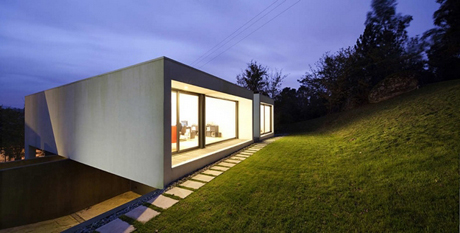 Given the challenging surroundings, the objective was to turn the living spaces towards the east, considering this is where the most interesting visual points are, and to make rooms face south due to the quality of sun exposure, privacy and relationship with the existing topography. On this side of the building the existing ground level is higher, enabling a connection and continuity between interior and exterior.

Grazina tells Phaidon: “On this particular project the key factor, and one that was very clear to me from the early stages of the project, was that this particular topography would cause the house to be partially inserted into the ground. This assumption enabled all the following design decisions, and development of the project, to be very clear. So, the main idea was to produce spaces that would open up to the landscape and views, and on the other hand, spaces that were secluded, almost isolated, or focused on very particular and narrow points of view of the surroundings. Also, the transitions between outside and inside were very important to me, as they generated interesting spatial events."

The architect is currently working on a number of projects including a refurbishment in the north of Portugal, the interior design of a shop in Lisbon, and a number of furniture design and small scale pieces. “For me it's really important to develop work on very different scales,” he says.