From 2014 Hajj pilgrims can expect a new railway station, restaurant and hotel

How do you accommodate 30 million passengers per year? It's a challenge for any international airport, yet difficulties are compounded in Jeddah, where passenger numbers rise exponentially around the key dates in the Islamic calendar. The King Abdulaziz International Airport is the conventional touchdown point for Muslims destined for the holy city of Mecca. Its open-air concrete pavilions, built in 1981 and used to welcome the millions who undertake the annual Hajj pilgrimage, stand as testament to the huge rise in traffic at this time. 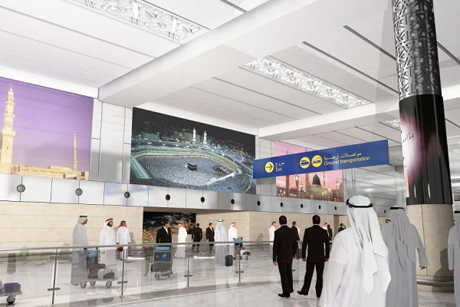 Yet a more comfortable, contemporary welcoming is being prepared. These designs are by London firm Areen, which is overseeing the airport's interior, as part of a full-scale airport regeneration. Areen say they've drawn inspiration from "the local environment and cultural references as well as the historical art and architecture of Jeddah," and that the new designs will provide a "contemporary and yet culturally sensitive gateway to Jeddah and the Holy City of Mecca."  Pilgrims will have to be patient though. Full completion is due 2014, inshallah, as they say in Saudi.